On top of the world: Nepal

April 01, 2011
After successful Global Food for Thought Meals focused on Tuscany and on Hunger Around the World, the most recent one took us to Nepal "The Roof of the World."

The menu I designed: 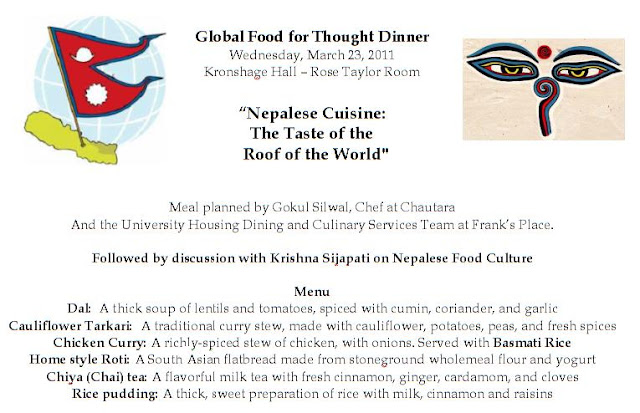 The whole meal was based on a menu designed by GS, a chef at Chautara, a Nepalese restaurant in Madison, and was supposed to capture some of the essential elements of the country's cuisine.

And the chicken curry, rice, and cauliflower tarkari:

Although the food was delicious, the highlight of the evening was a discussion led by Radha and Krishna Sijapati, two Madisonians who grew up in Nepal and have worked to form local Nepalese cultural groups since moving to Wisconsin. They brought such warmth, energy, and insight into our conversation, talking with the students about the Hindu caste system, about how the physical environment and climate regions of Nepal shape the cuisine in each of those areas, how food practices are affected by religious beliefs, how sharing and communal access to food was a core part of their experiences growing up (Radha told a charming story about how when a family harvested a pumpkin, because the pumpkins Nepalis grew were so large, they would break it up into several pieces, and have the children deliver different chunks to different neighbors, so that it would all be eaten before spoiling. Then, when another family broke open another pumpkin, the original family would be repaid in kind), and more. 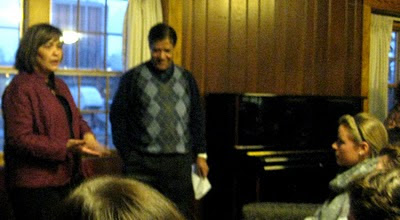 This was the first Global Meal that I organized all on my own (although I relied on many others to execute it all!), and it was a real relief to have it go off with such good food and such stimulating conversation.

Only two more to go! Vegetarian/Indonesian in mid-April and Ecuadorian/sustainable chocolate in early May. Stay tuned.
Global Meal GreenHouse