March 04, 2011
This week, the Global Food for Thought Meal was a Hunger Banquet.  Now, if you've never experienced one of these before, the basic idea is that you provide this exercise to spur reflection among the participants about privilege and the poverty around the world.

The participants draw a random slip of paper from a bowl as they enter the room: red, green, blue, yellow. Then, they find out that each of these colors corresponds to some socioeconomic class and that they will be eating a meal representative of that class.

25% of participants were assigned to the "abject poverty" group. Their table looked like this:

Yes, that's a tablecloth on the floor.  It was supplemented by one dish of plain rice and three spoons.

Another 25% of participants were assigned to the "moderate poverty" group. Their table looked like this: 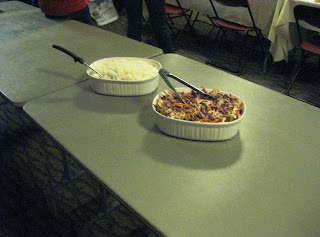 35% of participants sat here, in the middle-income bracket, with simple place settings, soda, rice and beans, a chicken stir fry. 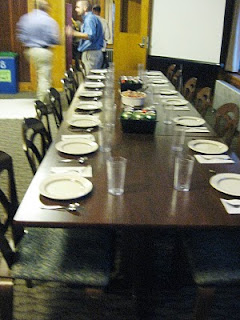 The remaining 14%, the consumer class, dined here, with a white tablecloth and servers and green salad and beef tenderloin and drinks galore: 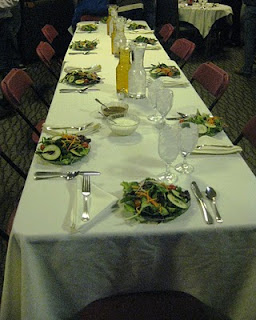 The math-savvy among you may ask: what about the remaining 1%? That group, the ultra-rich, found a star on the back of their "consumer class" slip of paper, and found themselves at this table, being served hand and foot, with candles and wine (though non-alcoholic, in this undergraduate setting): 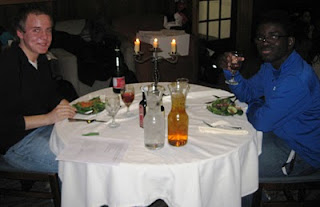 There should really only be one diner here, but the organizer didn't want that student to be lonely. I suggested that the loneliness might better capture the lack of community and disconnection from humanity that seems to happen among the highest income bracket!

This whole exercise can be a little hokey, but watching the way the students responded to it, modified the distributions with their own system of handouts, and then discussed the corresponding issues in small groups after the meal was really exciting.  We also connected this to the awesome What the World Eats project, showing the students an example of a family that might correspond to these groups. The Aboubakar family of Breidjing Camp in Chad in Abject Poverty. The Ayme family of Tingo in Ecuador in Moderate Poverty. The Ahmed family of Cairo in Egypt in the Middle Income Bracket. And the Caven family of California in the U.S. in the Consumer Class.


I found myself in the abject poverty group, but did not go hungry, because the other groups--in a totally unrealistic scenario--shared with us cabbage salad and apple crisp and some spinach and water.  Most of the time, we are not in the same room as those who suffer from hunger, so we do not see them and do not feel compelled to share.  This, and many other elements of the exercise, of course, are not realistic.  And yet, there was something really thought-provoking about the whole exercise.

Yes, we hear the common claim that poverty is not caused by a lack of food in general, but by problems of access, distribution, and power. But what does that mean, exactly? How do we move forward to address those problems of access, distribution, and power which are so systemic? What movements on the ground are in place to work on these issues? How do we see poverty even in our own country and where are its roots?  How do we dramatize the world hunger that exists so that it affects all of our daily actions?

These questions, and many more, rise to the surface and remain mostly unanswered. But the reflection and awareness spurred by a Hunger Banquet are definitely the ways to begin.  One place to start: Oxfam's Do Something website. Other thoughts and resources you guys have to offer?
Global Meal GreenHouse Reading Links