April 11, 2011
After culinarily visiting Japan last month, the sushi-making tour made a stop at last week's GreenHouse MYO* Meal Night for an evening of seaweed wrapping and wasabi adventures.

And so a little sushi tutorial here at D&O seemed to be in order.  I first learned my sushi-making strategy and technique from my oldest friend KW in her childhood Arkansas home, before I had ever even eaten sushi in a restaurant, and it has carried me through all these years. I don't know how authentic it is, but it's what I've got to share with you all for now.

The building blocks for this particular sushi night: 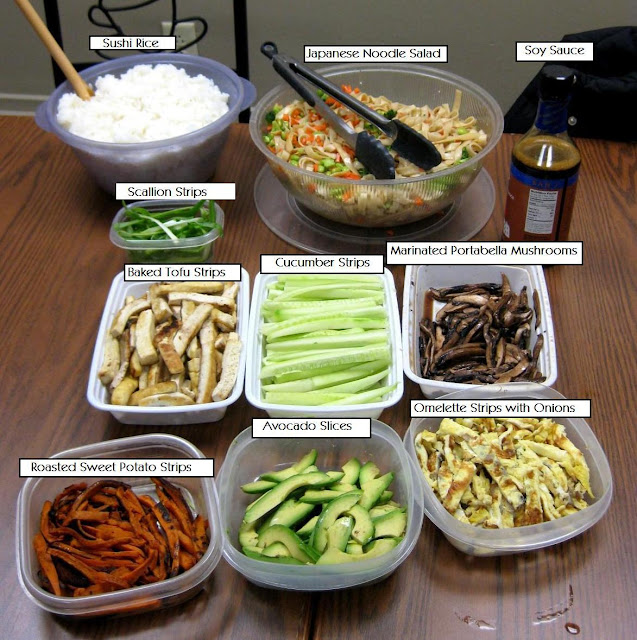 ...plus the nori (toasted seaweed wrappers) and some wasabi (a spicy Japanese green horseradish relative, which is delicious when added to soy sauce for sushi roll dipping). More details on my particular ingredients that merit further explanation:
Aside from the particular ingredients I used this time around, the basic building blocks for any sushi are (1) nori, (2) sushi rice, and (3) assorted fillings, as simple or as complex as you'd like--vegetables or fish or meats or even fruit could work, I'd imagine! Try to stick to 1-3 fillings per roll.

Once you've assembled your basic ingredients, you just take a sheet of nori out of its package and spoon a sticky flat layer of rice onto one half of the sheet. You don't want the rice layer to be too thick (< 1 cm) and you want it to be as uniformly pressed down to the very edges of the nori as possible. Then, you lay a few long strips of your filling in the middle of the rice, running parallel to the layer of rice. Again, careful not to overstuff! Simpler flavor combinations are often better (this go-around, the combo of omelette strips, cucumbers, and scallions were a big hit). Finally, starting from the ricey end, you simply roll the seaweed and rice over and over until it's all rolled up, as tightly as possible (some people use a special sushi mat for rolling, but I've always gotten by without one). Seal the edge by dipping your finger into a small bowl of water and running that over the edge of the nori.

The hard part is what comes next: slicing the roll cross-wise to produce those beautiful circular pieces of sushi. Use as sharp a knife as possible, and move your knife in a back-and-forth motion to cut through the outside nori layer rather than just smooshing the roll with your knife. Often, the end pieces just have to be eaten on the spot (not such a big sacrifice!), as they're rarely tightly filled enough to stick together on their own.

Arrange your sushi slices on a platter, and serve with soy sauce and wasabi for dipping!