April 22, 2011
So, I know I promised a post on soy this week, and there really is one in the works, but today it just seemed like I couldn't get by without mentioning Earth Day, and wishing you all a Happy Earth Day! 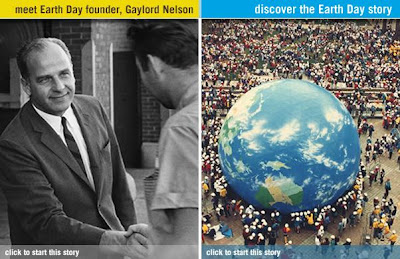 Image from www.nelsonearthday.net
Even though my favorite blogger Sharon Astyk hates Earth Day (and I totally understand why),* we here in Wisconsin have a particular attachment to the holiday because it was started by our very own Senator Gaylord Nelson.  In September 1969, he "proposed a national teach-in on the environment to send a message to Washington that public opinion was solidly behind a bold political agenda on environmental problems." And this grew into the first Earth Day, observed across the country on April 22, 1970, which historians continue to view as a watershed moment in the history of environmental politics.  The quote above, as well as lots more historical goodness, is from a website that my oh-so-impressive friend Brian Hamilton created for the UW's Nelson Institute for Environmental Studies (named after the senator himself!) in honor of Earth Day's 40th Anniversary last year. You should most definitely check it out.


And so on this Earth Day, in keeping with the themes of this blog, I'd like talk about food as an environmental issue. 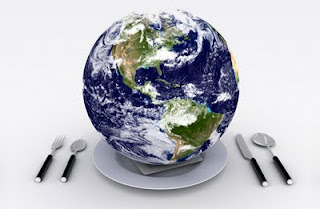 Image from www.sheknows.com**
Now, I've gotten to the point where it's nearly impossible to think about food as anything but an environmental issue, but I also still realize that are many people who haven't made this connection, or from it's not as clear as it might be, so I'd like to practice making those connections.  There was also a really interesting article in Time a few months ago entitled Foodies Can Eclipse (and Save) the Green Movement, which compared the food and environmental movements and tried to show how the former could succeed where the latter had failed. Now, I didn't quite buy all of the arguments that this article was making, but it's a claim that is really intriguing, and makes me pause and reflect on how much this recent upsurge in food interest is a "movement" and what that idea of a "movement" might mean for the future of this nexus of interests.

So, I'd like to share a short list I came up with of environmental issues that can be addressed by food choices, along with some links to articles to read more. A predominately local, organic, vegan, non-processed, non-pre-packaged, thoughtful diet can help to address:

Oh boy.  I think I have to stop writing now, not because I've said all there is to say (so far from it! this feels like one of the shallowest posts yet...) but because beneath all this lies the iceberg, and I'm afraid I'll freeze if I go too much further.

At the bottom of all of this, though, is the hope that by changing our diets, by making food choices that allow us the joy and pleasure of food that is wholesome and that connects us to the communities around us, we can also address these huge, looming environmental problems that threaten to swallow us whole.

Let's swallow them instead, by swallowing food that is as good as it tastes.


* You should really click over and read Astyk's 2010 Earth Day post, but if you're not going to, here's a little glimpse: "Yes, I'm the original poster girl for 'your personal choice makes an impact'--but not one day a year. And yes, teaching kids about the basics of environmentalism is awesome, and having festivals is good. But the truth is that I don't see it sticking. I see Earth Day as the new Valentine's Day or Mother's Day, a Hallmark holiday for us to give lip service to the environment. There are contrary forces, good in the mix - but then there are good things in the mix of Mother's Day or Father's Day or Valentines as well. But the reality of Mother's Day doesn't seem to be that it inspires us to be more respectful of the needs of mothers - what comes out of Mother's Day isn't more calls for breastfeeding stations and child friendly policies, but a "we told you we loved you last Sunday...aren't we done yet?" The same is true of Valentines Day--there's no compelling reason to believe that once a year special chocolates and sex really do all that much to lower the national divorce rate."

** The page from which this image was taken provided a really bizarre example of the kind of greenwashing that Astyk finds so distasteful. The page was purportedly offering Earth Day Recipes and asked "What better way to celebrate Earth Day than with recipes that are not only tasty, but local, fresh and environmentally friendly?" And yet, the recipes that this website offered made absolutely no mention of the provenance of your ingredients--no mention of using local or organic dairy products, for example--and included a Fruit and Nut Coleslaw with canned tropical fruits (decidedly non-local and non-fresh) and an Earth Day Dirt Cup that called for instant chocolate pudding, frozen whipped topping, and gummy worms. So, if a dessert looks like dirt that makes it environmentally-friendly?! Doesn't make much sense...