On the complexity of meat substitutes


Yesterday, I wrote about some of the thoughts I was having during a Vegetarian Global Food for Thought Meal (aptly-named, eh?!) about the place of meat-eating/vegetarianism in a global, environmental context. And today I’d like to follow up with some of those thoughts, reflecting a little on the kinds of thorny situations vegetarians sometimes get themselves into.
I guess it’s a little backwards for me to be writing about some of these challenges to the traditional views of vegetarianism before actually writing a post about my vegetarianism itself (it’s like when environmental historians try to undermine the idea of “nature” to people who aren’t environmentally-inclined in the first place*), but hopefully I will get back to the latter at some point and hopefully many of you are at least acquainted with the myriad reasons that a vegetarian diet often makes the most sense. (If not, read these 49 reasons** or Jonathan Safran Foer’s “Against Meat” essay as starting points).
Perhaps a good way to dive in to this larger topic of the complexity of vegetarianism is to take the humble Boca burger as our example. If someone were to offer me the choice between a Boca burger and a hamburger, it would at first seem like an easy decision. I’m a vegetarian; I take the Boca burger. 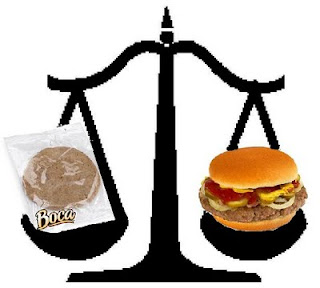 But now let’s say that this particular hamburger is made from grass-fed, free-range beef from a small local farm right here in Wisconsin, from a cow who was raised by a farmer who I could meet and whose hand I could shake (farms like this abound in Wisconsin: Trautman Family Farm and Ruegsegger Farms are just two I know about. You can find similar farms in your area at Local Harvest or Eat Wild).
And then let’s dig into the Boca burger’s murky past to find that it, like the Catalina Dressing I wrote about earlier this week, is owned by Kraft, the largest food processor in the country. And although, as Aaron so assiduously pointed out in the comments here, Kraft is now longer owned by the former tobacco giant Phillip Morris (now known as Altria), it’s still a huge multi-national corporation with its hands in all sorts of shady dealings, like testing on animals, producing highly-processed foods, and marketing unhealthful food-like substances to children (think Kool-Aid, Oscar Mayer, Velveeta, Cheez Whiz, Cool Whip, Jell-O, Chips Ahoy!)***  Boca Burgers are also full of processed ingredients:
Ingredients
Water, Enriched Textured Soy Protein Concentrate Product (Contains Soy Protein Concentrate, Caramel Color, Ferrous Sulfate, Niacinamide, Zinc Oxide, Calcium Pantothenate, Thiamin Mononitrate [Vitamin B1], Pyridoxine Hydrochloride [Vitamin B6], Riboflavin [Vitamin B2], Folic Acid, Cyanocobalamin [Vitamin B12]), Wheat Gluten, Soy Protein Concentrate, Contains less than 2% of Methylcellulose, Salt, Dried Onions, Natural and Artificial Flavor (Non-meat), Yeast Extract, Sesame Oil, Hydrolyzed Wheat Protein, Disodium Guanylate, Disodium Inosinate.
…which means the energy that goes into each factory that pumps out each of those different ingredients, not to mention all the pesticides/fertilizers/herbicides that have to be used to grow the corn and soy from which most of those ingredients are derived, has got to be at sky-high levels. (For more on the questionable place of soy in our diets more broadly, in response to NB's request, check back next week!)
So, now when we look back at that hamburger and that Boca burger side-by-side, my resolve is starting to shake a little bit. Sure, I’m a vegetarian and don’t particularly want to bite into a beef burger, but that Boca burger is also starting to look decidedly unappetizing.
For those vegetarians who are motivated primarily by animal-rights concerns, the fact that the Boca burger is vegan and has no animal products will make it a sure win over the beef burger, since the latter clearly caused the death of at least one animal--that is, the cow from which the beef came.  But when you start to take into account the myriad other reasons that motivate my own vegetarianism--environmental arguments foremost among them, but also a desire to not support large food processors, to be healthy, and to more efficiently use the energy that comes from the sun through plant’s photosynthesis--it's no longer at all clear that these reasons come down on the side of the vegetarian Boca burger (when compared with this very particular sort of meat product, of course, which is still by far the exception to the rule of meat in America, most of which comes from industrial scale factory farms where animal suffering is the norm and nearby water sources are polluted by runoff and all kinds of antibiotics are injected into the meat and the animals are fed on corn pumped full of pesticides/fertilizers/herbicides).
In any case, there’s so much more to be said about all this,**** but these are some opening thoughts that I’d love to start a conversation about. What do you all of you--vegetarians and meat-eaters alike--think?  How to make these difficult decisions, and what to take as our overarching guidelines for making food choices?
---
*Perhaps more about that later as well, though if you’re interested in a short tidbit on that, here’s something I wrote a long time ago that inspired a blog that is no more.
** Anyone know of a better quick overview than this?
*** Half of those aren’t even real words!
****And lots of people have said more. Michael Pollan, as always, has wise and good things to say, in case you want to read more:  his essay An Animal’s Place is really powerful and one of the first things that ever made me think I might consider eating certain kinds of meat someday, and this little Q&A from his website on Animal Welfare is also worth reading.
Consumption Reading Links Veganism