April 20, 2011
It's Passover this week, and even as we should be taking time to think about existing forms of human (and animal!) bondage and to break [unleavened] bread with friends and family, we here in the twenty-first century of Madison-grad-student lives somehow only managed to squeeze in a little makeshift seder at a local pub before seeing our favorite "baroque, anti-war, liberal, Portlandian, eastern-European, Shakespearian, English romantic"-influenced American band.

In addition to enjoying some Great Dane IPA, we also had a seder plate made up of a combination of items that Justin and I smuggled in separately and some of the things that we ordered. Clockwise from the top of the plate: 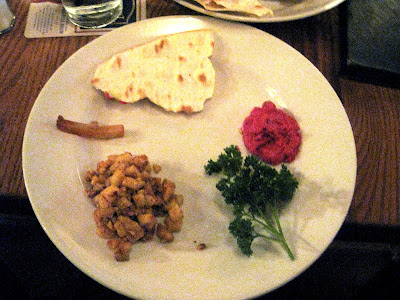 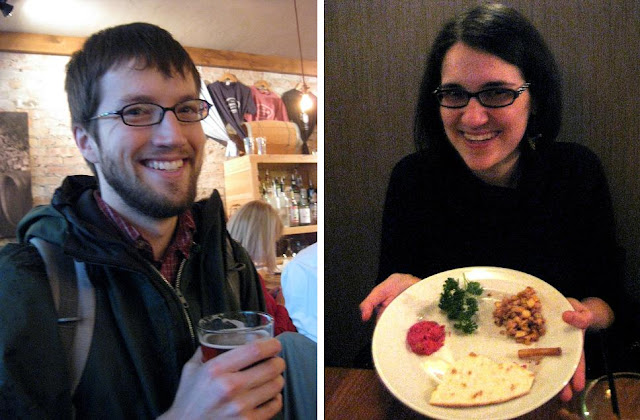 I like thinking about the symbolic and ritual elements of food--the way that particular tang of salty parsley can conjure memories of seders past, the way that all food reminds us of larger ideas, of comfort, and community.  Even if this particular seder plate was cobbled together in a decidedly non-traditional manner, there was still something gratifying in its preparation, in what it did to help us take notice of this Jewish holiday that has such deep roots and that is being celebrated by Jews across the world (even if it, as with most Jewish holidays, is somewhat invisible to the larger community of which we are a part).

And then after this Passover ritual, we transitioned to another ritualistic activity: the indie-folk concert, complete with flannel shirts and green hoodies and applause-induced encores and even some talk of Solidarity!

Colin Meloy, the Decemberists' witty and charming front man, evoked crazy cheers from the crowd when he came out with a guitar that had a sticker of the now famous Wisconsin solidarity fist prominently displayed. 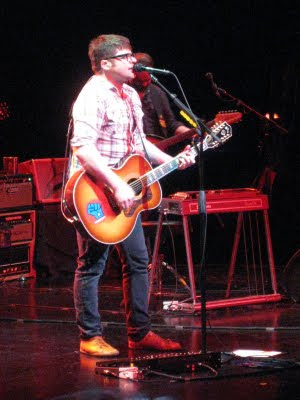 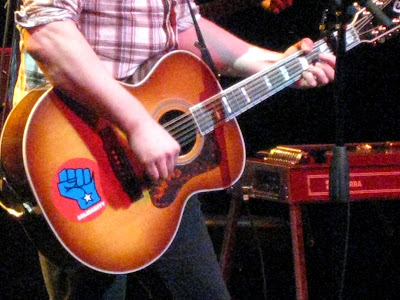 The sticker--in addition to an awesome pre-recorded greeting from Portland mayor Sam Adams that encouraged everyone to meet and compliment the people sitting beside them; a heart-breaking rendition of Eli the Barrow Boy; and a typically-awesome interactive take on The Mariner's Revenge Song complete with a gripping story and whale jaws and audience screams--made the show a hit, even with this being the fourth time we've seen these guys in concert.