April 29, 2011
After pot-lucking, enjoying a homemade cookbook, and working on a farm, my birthday came to an end (at least the day itself, if not the birthday week) at one of my favorite restaurants in town, Restaurant Muramoto. In fact, after this dinner, I went so far as to call it "my favorite restaurant in Madison" (not just "one of"), though, in retrospect, that may have been a little rash.

Nonetheless, the food was so full of flavor and body that I'm dreaming of it still. 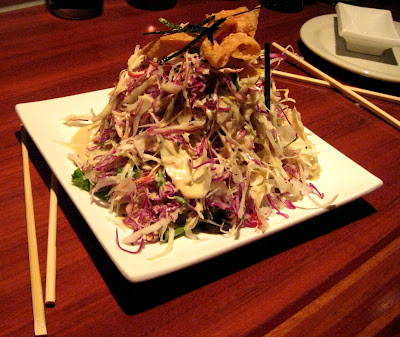 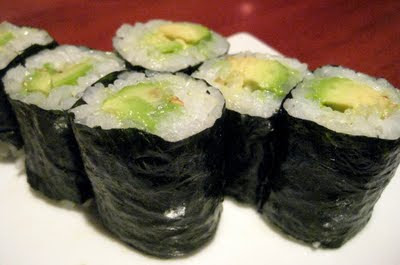 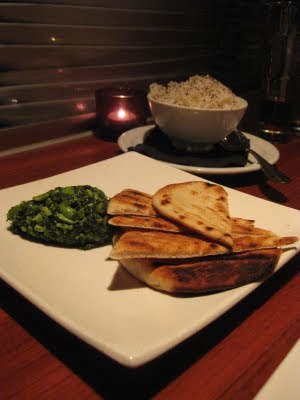 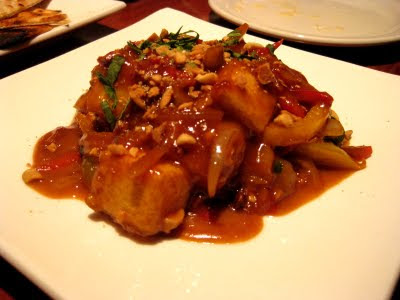 And finally, lime granita with almond shortbread and huckleberry pure 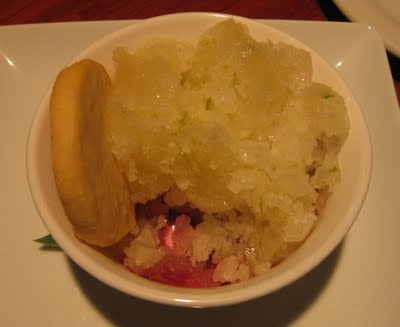 Despite sounding kind of boring, the Asian slaw is what keeps us coming back, again and again. I don't know if it's clear from the photo above, but this is one giant mound of slaw--probably at least 9" high, and perhaps even taller. The red and green cabbage, along with a few other vegetables like bright yellow bell pepper--are sliced so finely that they are almost fluffy, and the whole of it is dressed by a creamy savory sesame vinaigrette that impresses without overwhelming.  This slaw is delicious in a knock-your-socks-off kind of way.

The tofu in spicy coconut sauce, with its robust flavor and its delicate balance of julienned vegetables and crunchy peanuts--is another dish we can't go without, no matter how much other options tempt us. The avocado roll is an old standby that is consistently good, though nothing to write home about (though I guess it is something to blog about!). The naan and edamame tabouli were a new dish that we hadn't tried before, and although we enjoyed them as an accompaniment to our meal, I think we'll likely pass the next time around. The bread was a little dry, and the tabouli--though it gets innovation points for substituting the usual bulgur wheat with chopped edamame (fresh soybeans)--left something to be desired. Finally, the dessert, though it tempted me with its mix of lime and berries and buttery shortbread, was a little too tart and the granita a little too frozen to fully satisfy.

I'm inspired by the bold mixing of flavors that Muramoto pulls off so well, and want to think about how to incorporate this kind of amalgamation in my own humble kitchen.

Any recipe suggestions (for dishes that interestingly combine flavors or textures) to get me started?
Celebration Local Business