April 19, 2011
Even though the weather's been downright awful around here lately (wintry mix in mid-April!), we had one brief, glorious day last weekend when the sun was shining, the birds were singing, the bike lanes were overflowing, and that happy Madison vibe was all around.

I managed to get outside and spend a few hours in the sun at the garden site for the F. H. King Students for Sustainable Agriculture, for their spring kickoff event. I first encountered FH King (the organization, not the man himself) three summers ago, when I was walking through the Library Mall on campus on a warm July day, flustered and in a hurry to teach a class, and was greeted by a table covered in carrots, earthy and with the greens still attached. The table had a sign reading "Free Local Produce Grown by Students! Take Some!" I did a double-take, paused, filled my arms up with bright crunchy sweet carrots and rushed off to class, feeling like I had landed in some sort of secular agricultural heaven.

And almost every Friday in the summers since then, I have visited the FH King table on Library Mall for their weekly Harvest Handouts. Because it is a student organization, funded by student activity fees, FH King hands out, for free to students, the organic produce they grow on their two acre farm just a couple of miles down the Lakeshore Path from campus. They also donate some of the vegetables to local food pantries.

All around, it is an awesome organization, with good people, good values, and good agricultural practices.  Just one of the things that makes Madison feel like home.

So, this particular weekend, for the Spring Kick-off event, in addition to the delicious potluck food brought by FH King members and friends,  we had fresh flatbread pizzas straight off the grill, created by Jonny Hunter of the Underground Food Collective and Kitchen. 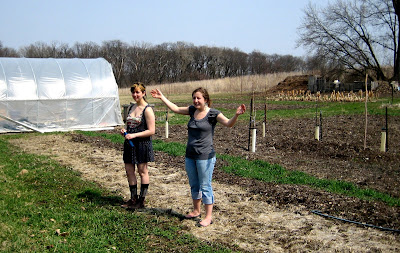 And the sounds of local bluegrass band Honey Summer & Fall, along with the cuteness of Jonny's son Marlo kept us happy and entertained:

Now if only more beautiful weather would come, and bring grilled pizzas, gardens, bluegrass, and cute babies with it, I could really feel like it's spring!
FH King