December 05, 2011
The division of labor is surely necessary to increasing productivity. And yet, the whole DIY movement, of which many of my food interests are a part, celebrates a kind of independence that encourages each person to have the skills of the baker, the cook, and the candy-maker, all in one.

Still, there is something really delightful about sharing the fruits of your labor and benefiting from the specialized knowledge and skills of others. Enter the idea of the food swap. Lots of other cities have taken this idea in various directions, LA prominently among them.

Led by my inspiring friend, MH, we decided to have a a food swap of our own here in Madison, though we made up our own rules.

We (each of the organizers) made a small list of food friends, and sent them the details well in advance, inviting them to come to our party, and to bring 5 homemade food items with them.  We focused on pantry items, rather than those than needed the fridge or freezer. Think salsa, jam, pickles, chutney, applesauce, homebrew, cookies, bead, kombucha, granola, vinegars, dried herbs, homemade condiments, etc.

Our own contributions? I brought canned dilly beans, pickle spears, corn relish, and some assorted dried herbs from our garden (basil, sage, and Italian mix, and mint). JH brought homebrew and some amazing home-made truffles (his recipe to follow tomorrow!).

We had a great turn-out, with between 30 and 40 people. When all the items everyone brought--wrapped in newspaper--were piled in the center of the room, it made a pretty rockin' mound: 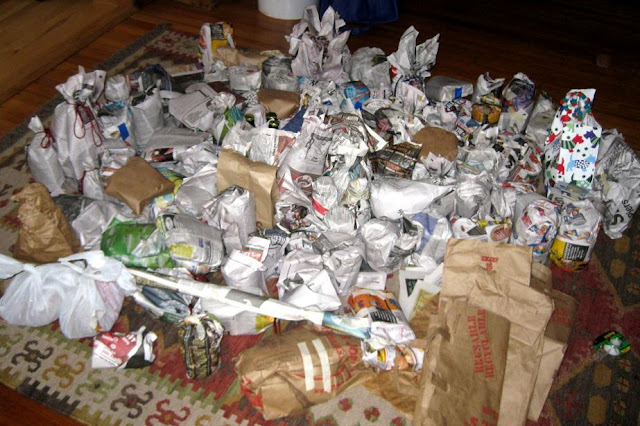 We then proceeded with the swap, in a modified white-elephant style. There were two rounds. Everyone drew a number out of a bag, and that determined the order in which they'd choose items at random from the center of the pile. For the first round, everyone simply chose two items, unwrapped them, and showed them to the group. Sometimes we heard stories about the food items--how they were made, where they were grown, etc.

For the second round, everyone drew numbers again. This time, however, when it was your turn, you could choose three more items--either unwrapped from the center pile, or by stealing someone else's item that you already had your eye on. The person who was stolen from could then choose an item from the center to replace their stolen item.  It was fun to see what items became hot commodities. The top stolen items were, I think, a Mexican piquin chili sauce, canned red root relish, and some wild plum jam.

Still, most everyone ended up with items they were excited about.  We certainly did!

We came home with some fresh kale and peppers (not part of the swap--just there for the taking from the FH King garden), two bottles of home-brewed IPA, a bag of dried herbs, a little bread in a pot, a bag of granola, some chocolate caramel crack(ers), and an assortment of canned goods: rosemary rhubarb jam, a rhubarb lemon chili marmalade, one of the chili piquin jars, a cherry apple jamly (cross between jam and jelly), a carrot pepper relish, and a honey strawberry jam.

It was a super-fun event, and I'd encourage you all to re-create one among your own friends. If anyone has more specific questions about how we planned or executed this, please let me know! And let me know if you want to come to the next one here in Madison...
Canning Gifts