March 09, 2011
Last week, while I was in the market for winter meals that could be made with the last bits of hardy vegetables we still had in the fridge, I decided to keep channeling the Eastern European in me (as my mom wisely pointed out in her comment on this post), and create some sort of hearty stew with what we had on hand: cabbage, carrots, a bit of broccoli stem, some jarred tomatoes.

But I realized it would be nice to have a bit of protein and something with some chewiness to it in this stew, and so I turned to two methods, one new and one old. Today, I'll be profiling the new method (making my own seitan!); tomorrow, the old method (pressure cooking chickpeas); and then on Friday, I'll show how it all come together to make this pot of satisfying stew: 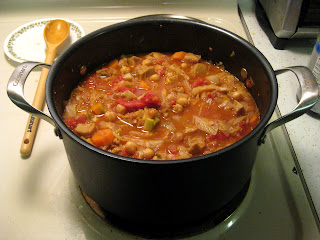 So, for those of you who haven't heard of seitan, it's basically a protein-rich food made from the gluten of wheat.  Wheat gluten is just the protein-rific part of wheat flour that provides that pleasing stretchiness to dough. Unfortunately, it's also the part of wheat that some people (including my father-in-law) have allergies or intolerance to. However, if you're not averse to gluten, it's a great source from which to make nice, chewy seitan.

I had eaten seitan in restaurants, and had bought it pre-prepared, but had long wanted to make it myself, because I had heard it was easy, inexpensive, and satisfying. So, I basically just used a combination of this guide (the recipe for Quick Homemade Seitan is about halfway down the page), and the recipe for Simple Seitan from one of my favorite cookbooks, Veganomicon.

Unless you want to make it yourself (by washing wheat flour dough with water until all the starch dissolves, leaving insoluble gluten as an elastic mass), the easiest way to begin the process of making seitan is to buy some Vital Wheat Gluten Flour (I used some I bought in bulk at the co-op, but I know Bob's Red Mill makes a good version). 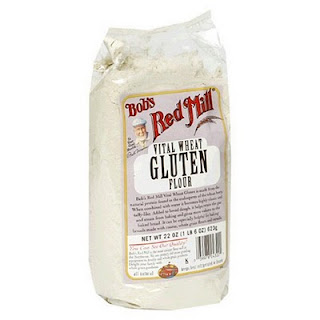 Then, this is the approximate recipe I followed, based on the ingredients I had on hand (see the recipe links in the paragraph above for more ideas). 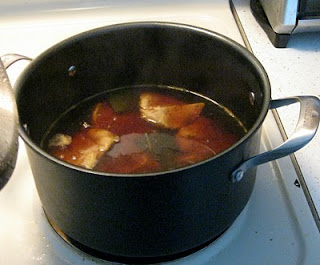 And here are the seitan cutlets, after they've been cooked and have cooled (not the most beautiful little guys, but supremely versatile): 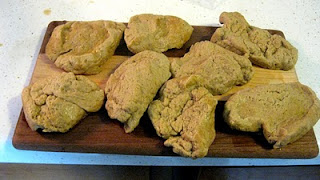 On the whole, I'm not sure if I simmered them long enough, or if they ended up the right texture--I've read that you shouldn't let them boil for more than a minute or two before turning the heat down to a simmer or they'll get rubbery, but I was very happy with my first attempt. Seitan is like tofu in that it soaks up the flavors of what's around it, but I think I could have made it a little more flavorful from the outset, by including more herbs and maybe some salt and pepper in with the initial wheat gluten flour. The great thing is you can pretty much include any flavorings, sauces, or spices that you'd like, in order to alter the taste of your final product. Mexican seitan made with salsa and chipotle peppers? Italian seitan made with pesto and parmesan? The possibilities are endless!

I froze half of these cutlets (four of them) in their broth for later use.  Come back on Friday to see what I did with the remaining four to make them part of my winter stew...
Food Prep Recipes