A few weeks ago, we took a break from the capitol to join a friend, EH, (actually a friend from high school who now lives in Madison), and his girlfriend who was visiting from Germany, for dinner.  They whipped us up a delicious dinner of arugula-topped pizzas, but EH told us that the best was yet to come, and that he had made a dessert for us that he was sure we'd never had before.

How could he be so sure, I wondered?  Did he know how widely I'd sampled the foods of this diverse culinary landscape of ours? Surely this dessert couldn't be *so* unusual.

And then he brought out this: 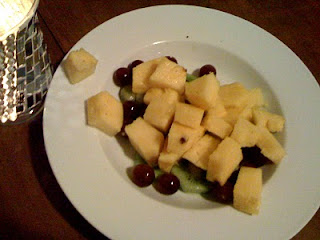 A bowl of fruit?! He thought we'd never had pineapple and grapes and kiwi?!

I decided not to say anything, to be polite, and not break his heart by telling him that I'd eaten grapes by the barrel-full in my day and that this was nothing new.

But then, I bit into a piece of pineapple and...an explosion of tingly, bubbly sweetness like nothing I had ever tasted! This pineapple was no simple pineapple, it was--get this--carbonated! Seriously, carbonated fruit that EH had created in a carbonating machine he had built himself in order to make fizzy water inexpensively and at home.

He had used his engineering skills to build this contraption with a carbon dioxide tank, and had extended its use to fruit, much to the pleasure of my taste buds.  EH said he'd also tried this with fruit juice (yum!) and milk (not so yum) and was thinking of other things he could try.

I went home, impressed and satisfied, and then did some googling, only to find videos of how to make carbonated fruit at home even if you don't have EH's engineering skills (with dry ice), online merchants of packaged fizzy fruit, and other explorations of carbonated fruit goodness.

What's next in this crazy world? Thanks to EH and JT for the one-of-a-kind meal!
Food Prep