March 30, 2011
While I've been making my own seitan and my own cheese and planning to cater a wedding, Justin's been thinking about trying his hand at a DIY project of his own: Beer Brewing.

The perfect opportunity arose recently when our friends HS and AS invited us over to their place for some conversation and brewing of beer.  Justin got just the right tutorial, so that now he's rarin' to go (stay tuned for a guest post from him on his first beer-brewing adventures?)

The batch we worked on for this particular incarnation was the Sven's Oatmeal Stout recipe. You can see the basic ingredients here, all from the Wine & Hop Shop in Madison:

Some malt, oats, barley, hops, and water later, HS poured in the final ingredient--yeast--before leaving the whole mixture to ferment and get all yeasty and delicious: 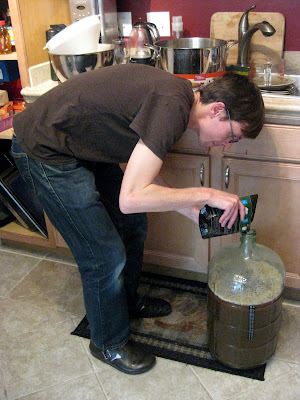 The other important parts of the afternoon were eating this chili that AS made, with all the trimmings: 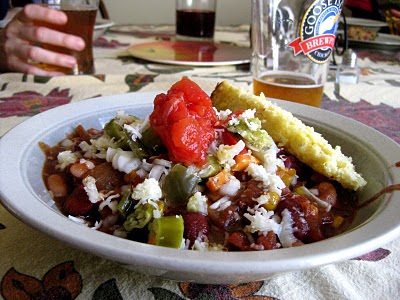 And eating this Gluten-Free Apple-Rhubarb Bread Pudding, which I made up on the fly in order to throw together a dessert from the ingredients we had on hand that could satisfy those with a sweet tooth and with gluten intolerance, alike. The dish came together with some Gluten-Free Bread we had in the freezer, left over from the last time that my father-in-law was in town, and with some rhubarb, still frozen from our CSA box from last spring, when things like rhubarb were in season. I got some inspiration from this recipe, and then moved on from there.  My full recipe is below, in case anyone wants to re-create this dish. 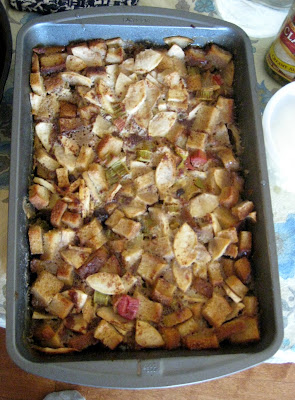