March 18, 2011
So, it turns out that making delicious mozzarella cheese is easy. And making butter is really, really easy.

Of course, it's especially easy if you have Linda Conroy, of Moonwise Herbs, and the excellent backing of F. H. King Students for Sustainable Agriculture to guide you, as I did. But either way, totally do-able.

At this homemade cheese-making workshop, I learned so many things about how cheese is made--things I probably could have learned if I had paid better attention to my Mama's own cheese-making during all those years growing up (but somehow, doing things yourself seems to be way cooler now that it's part of a DIY culture than when it was just part of immigrant frugality, eh?).*

Cheesemaker Linda provided us with some incredibly high quality materials to start with: raw milk from a grassfed dairy  near her home in Sheboygan, Wisconsin. This, I think, is the key to why all the results turned out so well (and the only reason I felt comfortable taking in so many animal products in one afternoon).

I learned so many things: that cheese is really just whatever is left behind when the whey is removed from milk, that the kind of cheese that forms depends on timing of the heating and the coagulation, that butter milk is just what's left over when butter forms from cream, that paneer (Indian) is made with lemon juice while queso fresco (Mexican) is made with vinegar, that culturing your dairy products (all of them! not just yogurt!) makes them yummier and higher in healthy bacteria, that the yellower your butter naturally is the more clearly you can tell that your cows were grass-fed (those pigments pass right through!).

Here is (1) the rich, think, delicious cream (that had just been skimmed off the tops of the buckets of milk that Linda picked up at the dairy) being combined with a little of the Piima culture Linda brought to the workshop. Then, (2) after lots of shaking of the cream, the separation of it into butter (the yellow mass in the middle), and buttermilk (the white liquid on the outside). And (3) finally, Linda pouring off the buttermilk from the butter, so that both could be enjoyed separately.

After making butter, we moved on to our preparations for making mozzarella and paneer cheeses: squeezing lots of lemons for their juice (which my yellow-sweatered friend NR does oh-so-charmingly): 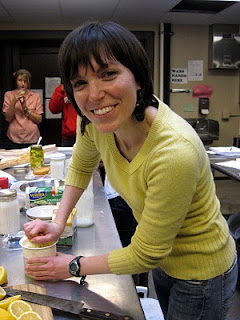 We then combined the milk with the lemon juice and a splash of prepared yogurt (in the first photo below), brought the mixture up to 86 degrees Fahrenheit, added a few drops of vegetable rennet (can be made from stinging nettles!), and then mixed until the curds and whey separated from each other. We then fully separated the curds from the whey, and heated the whey back up, way up to 170 degrees. At that point, we put the clumpy curds into the hot whey, and used two spoons to scoop and press the curds, until they started to form one solid mass. Then, using our hands and the spoons, we stretched and needed the quickly-forming mass of cheese (as seen in the third photo) until it became smooth and shiny, with no more of the graininess that had earlier characterized it.

And then, after letting the mozzarella cool, and slicing it into four chunks (and eating one of them!), we had cheese, as pictured at the top of this cutting board. (At the bottom you can see some smoked Gouda that Linda had previously made and brought for us to sample). 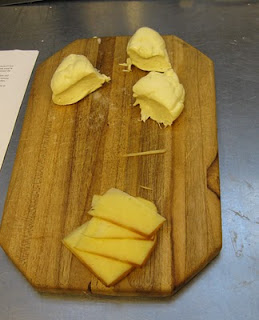 While we were making mozzarella, another group was making paneer cheese. From the Wikipedia page for paneer: "Paneer is a fresh cheese common in South Asian cuisine. It is an unaged, acid-set, non-melting farmer cheese or curd cheese made by curdling heated milk with lemon juice or other food acid. Unlike most cheeses in the world, the making of paneer does not involve rennet as the coagulation agent."

And indeed, the paneer was made very much like the mozzarella--with fresh milk and lemon juice--but the acid was added after the milk was already hot, rather than before, and the paneer had no rennet added.  Then, after the curds separated, they were collected, and pressed in a small pyrex dish under a heavy weight for about thirty minutes, until this beautiful specimen formed: 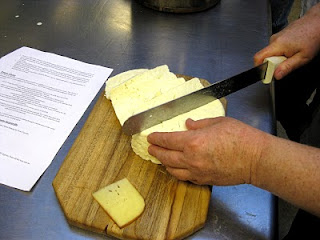 All in all, a really cool experience. I can't wait to have goats with a ready supply of milk so that I can start making cheese myself! Plus, baby goats are the cutest around--and no, I'm not kidding!

If anyone wants the more specific recipes for any of these dairy delights, let me know, and I can pass them on. Also, be sure to check out the Moonwise Herbs website, where you can buy Piima culture, a feta cheese kit, and all kinds of other cool Handmade Herbal Wares (like salves, lotions, creams, dried herbs, tinctures, infused oils, handmade brooms, and more!)

Has anyone else tried their hand at cheese-making?


---
* I don't actually think this, of course, but it sure is an interesting cultural shift, isn't it?
Food Prep