A taste of summer...

January 31, 2011
Now, in the middle of winter, we're staying well-fed by mostly local foods, thanks in part to some food preservation projects that we took on last summer, when the harvest was still in full swing.  In the hopes of invoking some summertime flavors, here's an account of canning some tomatoes, which we're currently enjoying in their jarred form.

We were lucky enough to score 25 pounds of ripe roma tomatoes from the farm from whom we buy our CSA (Community Supported Agriculture) share, Harmony Valley Farm, in Viroqua, WI, less than 100 miles from Madison. 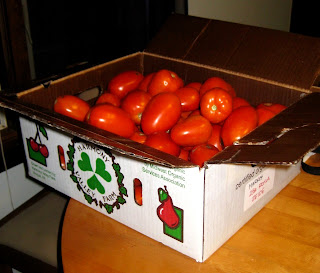 We'd hoped to be able to grow enough of our own tomatoes in our garden to have extra for canning, but due to the fact that (1) tomatoes are delicious, and eminently eat-able straight off the vine, and (2) that this is what our garden looked like for most of the summer (with a few tomato plants in front being largely overtaken by runaway squash that grew uninvited due to a little worm compost mishap): 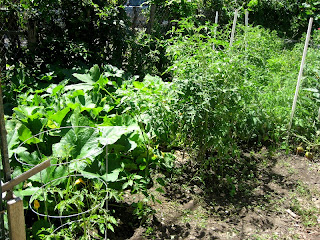 So, instead we turned to our trusty and honorable Harmony Valley (about which more in later posts) for the produce, and to the USDA Complete Guide to Home Canning for directions. (Along with some additional guidelines from my favorite blogger, Sharon Astyk at Casaubon's Book).

First, we cut X's in the ends of the tomatoes and then immersed them in boiling water to remove the skins.  You can see some of the skins sliding off all on their own: 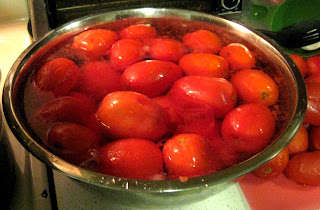 Justin actually found the tomato skin removal to be one of the most fun parts of the whole project: 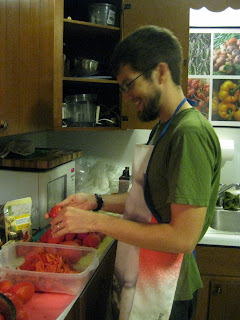 Then we quartered the peeled tomatoes and, as you can see on the left of the photo below, put them to simmer in two stock pots on the stove. Meanwhile, as shown on the right of the photo, we heated the glass jars by holding them in boiling water and then removing them with a jar lifter: 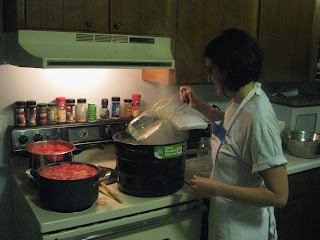 Then, we carefully filled the hot jars with hot tomato mixture using a large ladle and a wide-mouth funnel: 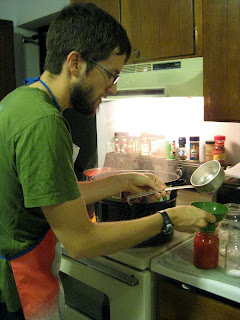 And when all the jars were filled, we had these beauties to behold! 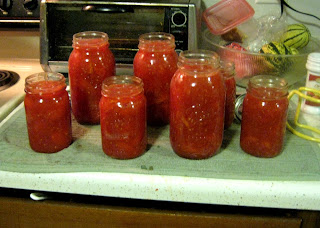 After putting the lids on and immersing them back into the boiling water for thirty minutes, we cooled them overnight and they were ready for the pantry!