In addition to seitan, I decided some chickpeas would work well with the hearty stew I had in mind. And so, I turned to our nicely-organized pantry and to my trusty pressure cooker to get the job done.  Pressure cooking is an adventure we only added to our kitchen repertoire in the last year or two, and I admit that  I've made limited use of the method so far (I'm itching to dive into this book that's been sitting on our cookbook shelf, without the attention it deserves, for the last year or so). But the one way in which it has changed our cooking life is the ability to quickly and efficiently cook dried beans, instead of buying them canned.

Even as I spend my days writing a dissertation about canned food, we've been trying to reduce actual commercially-canned food consumption in our house because it produces a lot of metal waste, it is more expensive than buying dried beans in bulk, and because of concerns about BPA (Bisphenol A, an estrogen-like chemical in plastics and in plastic can linings that leaches into food and can cause all sorts of problems).

But we eat a lot of beans, so the pressure cooker (with the help of our freezer) offers a perfect solution.

The first step in cooking dried beans is to soak them in twice as much water as the quantity of beans you have, for at least four hours (or overnight). Chickpeas soaking: 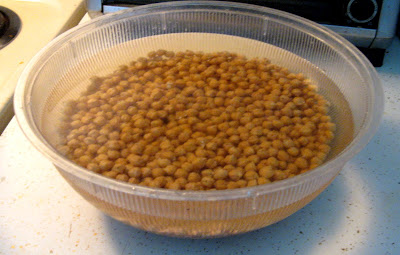 Then, you drain your beans, put them in your pressure cooker (this is the one we have) with a tablespoon of oil and just enough water to cover the beans, seal the cooker up tight, turn your heat up to high until the pressure indicator (the little knob on top) starts to rock vigorously [think heavy metal bands from the 80s], then lower the heat until the knob rocks gently [think sixties folk music]. You cook the beans for a few minutes from this point, depending on the bean. Chickpeas need 8-10 minutes, while softer beans like black beans or kidney beans only need 2-4. Most pressure cookers come with a guide to give you specific directions. 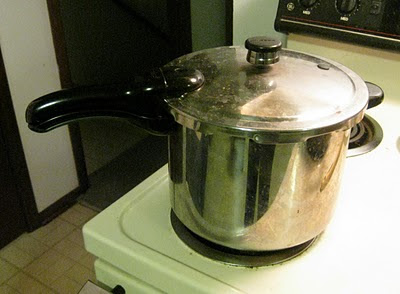 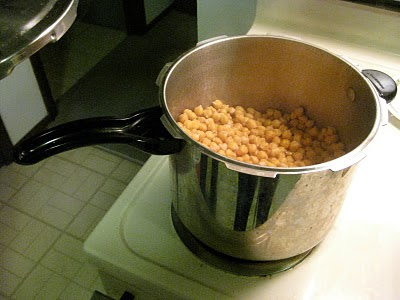 And then you let the pressure release on its own (sometimes I get impatient and release a little pressure by poking the pressure valve with a knife--but this is probably really dangerous and may just be the end of me) before opening up the cooker. It's really a very simple process, and not nearly as scary as some sources make it out to be.

Of course, if you don't have a pressure cooker, you can just do all this the same way, but instead of cooking the beans for 5ish minutes, you cook them for a few hours. Either way.

But because I never only cook one portion's worth of food at a time, I take the food preservation one step further and cook enough beans to bag some of them up and freeze them for convenient later use.

Rather than using a freezer-style zipper plastic bag to freeze each portion of beans, I re-use plastic bags that we save from bread or english muffins or store-bought naan, putting 1.5 cups of beans in each (I find that this approximates one can of beans, for easy portioning later): 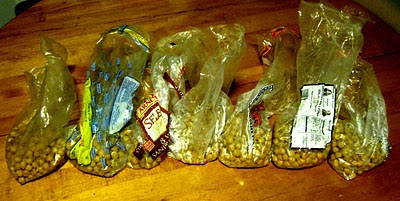 And then, instead of sealing each one of these bags individually, I twist the tops of the bags to get rid of extra air, roll them up, and put them all inside one zippered bag  (another re-use, of old tortilla bags with zip-lock tops): 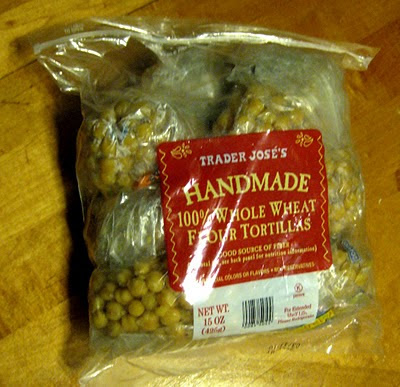 And voila! Cooked chickpeas to be removed from the freezer and used at my leisure. The whole process (not including soaking) only takes about 40 minutes, much of it un-attended. Easy peasy.

Come back tomorrow to see how these chickpeas made their way into my winter stew, alongside their seitan brethren.
Food Prep Pressure Cooking