October 03, 2011
I've written before about how I was first disappointed in Madison's Thai food offerings, upon moving here, because nothing compared to the Thai food of St. Louis, on which my love of the cuisine was founded.

Last weekend, we got to return to the place it all began, Thai Gai Yang Cafe in St. Louis. We were very excited (please excuse my closed eyes): 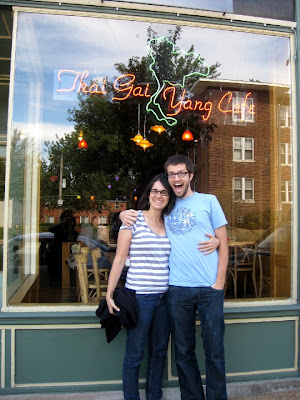 The signature dish that made Thai Gai Yang a star in our eyes, relative to the other Thai restaurants in the area, was the Yum Mama, listed under the "Salad" portion of the menu, described as "Warm egg noodle, ground chicken or tofu, red onions, green onions and cilantro, mixed with homemade sauce and topped with omelet." It is not only delicious, but lends itself to lots of bad jokes. 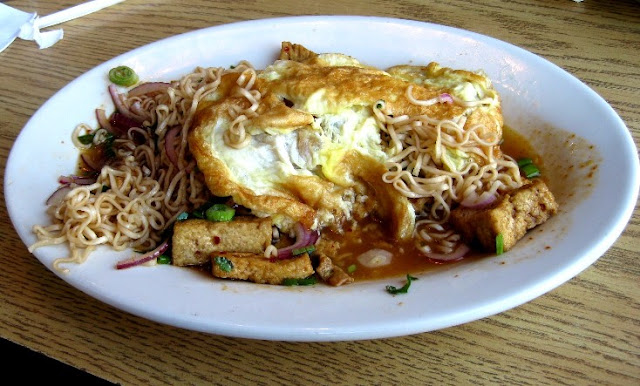 They also offer the tomato-y udon noodles, which are so satisfyingly fat and chewy:

And my favorite of all, the Pad Thai, which was so delicious that I only managed to take a photo after clearing almost the entire plate: 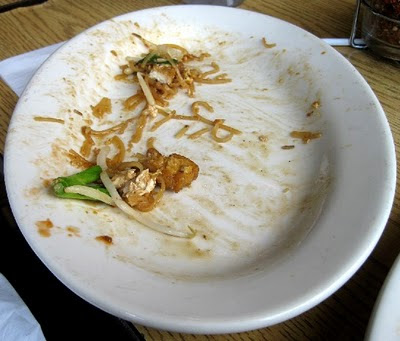 This pad thai--and, it seems, all the pad thai I've ever had in St. Louis--has a particular flavor that's different from other cities' versions. Pleasantly dry, with a lot of peanut, sweetness, and bean sprouts. Who knows why this style seems so prevalent in an entire city? But there it is, St. Louis Pad Thai, in all its glory.

Has anyone else noticed this sort of city-wide style in foods other than the oft-cited New York or Chicago-style pizza?
Restaurants