My father (though he is originally from Russia--definitely not the South) loved okra and grew rows upon rows of it in the large garden of my childhood home. My brother and I learned young how to twist and snap the pods from their tall stalks with big white flowers.

A recent New York Times piece on okra, Okra Recipes for Health, offered some delicious ideas for incorporating the vegetable into gumbos and stews and salads. The thing is, all of these recipes seem explicitly designed to undermine and mask the natural properties of the vegetable.  It seems that "sliminess" has led many people to think they dislike okra. Comments at the end of the article made statements to this effect: "It's not fair to ditch the vegetable just because you don't know what to do with it, or because you ate some underskilled amateur's slimy dish." or "Okra is only gooey /slimy when it is made by cooks who don't know what they are doing." 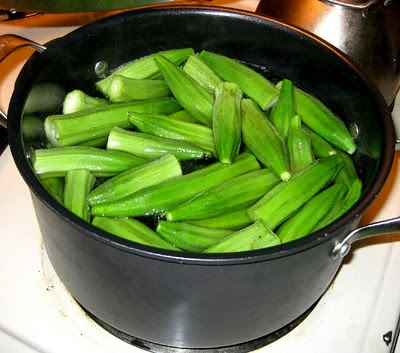 Simply boiling okra is my dad's preferred method of preparation, but this heightened the so-called sliminess, rather than masking it! It is specifically this smooth, slide-down-your-throat, comforting aspect of okra that makes it one of my parents' favorite vegetables. So, even though I don't love okra all that much myself, I want to defend it in all its slimy glory.

When we were last visiting my parents, they loaded us down with pounds of okra from their prolific garden, and we put some up in the freezer for the winter. We followed the directions from pickyourown, blanching some of the whole pods and then putting them in freezer bags, for later use in omelets or gumbos. 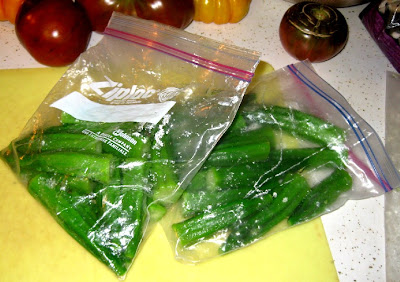 The rest of the okra, however, we prepped for frying, by slicing it after blanching, and then tossing the pieces with flour, and laying them out on a tray in the freezer until frozen, before collecting them all into freezer bags for the long winter. [Frying okra is the method most commonly used in the South, where the ever-present deep fryer helps render the okra totally un-slimy, if also pretty un-healthy.] 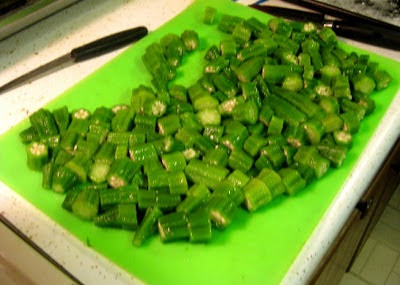 Because okra is a vegetable that grows especially well in the heat of a southern summer, we're hoping that eating some from the freezer in winter will help bring back a little bit of that mid-summer warmth...even if it is a little slimy.
Gardening