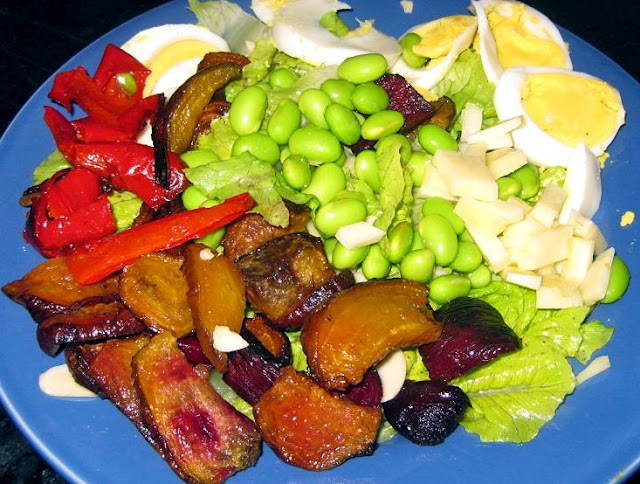 I enjoyed this salad so much, simple as it might have been, that I wanted to share.

It was just delicious.

It all began with the previous day's project of using up food in the fridge that was starting to look a little limp. I began with beets, red peppers, fresh soybeans in the pod (edamame), so many eggs (from the farm), celery, and some potatoes (plus some lettuce and lemon that would later come in handy)

I roasted the beets with a little oil and salt until they caramelized; roasted about half the red peppers, in long strips, separately; boiled the edamame and shelled them; made a big egg salad with most of the eggs, the rest of the red pepper, and the celery; I also just left a couple of eggs hard-boiled and peeled them for later; and I roasted the potatoes in thin slices with salt and a touch of oil.

So all of those contributed to my being able to quickly throw this salad together:


a few leaves of lettuce, torn into pieces
a handful of caramelized roasted beets
a few roasted red pepper strips
a handful of fresh cooked soybeans
one hard-boiled egg, sliced (or a dollop of egg salad)
a bit of cheese, chopped finely
a few almonds, sliced thin

I just combined all these together, squeezed some lemon over it, sprinkled on a little freshly ground pepper and salt, and voila! A magical salad resulted.