September 26, 2011
After spending the last few years getting to know the impressive programs at the University of Wisconsin that are promoting knowledge about local food and environmental sustainability among undergraduate students--GreenHouse, F. H. King Student Farm, and Slow Food UW, for example--it is really interesting to see what's going on at other universities.

I had a chance to wander through the campus of my own undergraduate institution, Washington University in St. Louis, to see the progress it had made in those same areas of local food and environmental sustainability. A little overview:

The main eatery on campus, the DUC, was advertising their featured local suppliers, and there were posters for an on-campus eat local challenge: 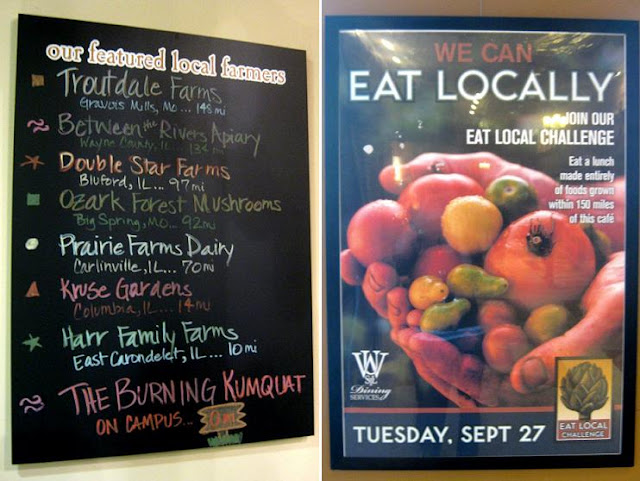 Wash U now has its own student farm! This wasn't around when I was there, so it was exciting to get to see and tour The Burning Kumquat Farm, and talk to a few of the students who were working there when we passed through. They told us that they their produce goes to a variety of places: they sell it do Dining Services on campus, the farm members take it home, they sell it at a local farmer's market, and they also sell it to students from a campus farm stand:

On the residential campus, the South 40, the convenience store--which used to sell only packaged foods--now has a sizable produce section! Fruit and vegetables galore.  I wonder how students make use of this raw produce--whether they do a lot of cooking in the dorm kitchens or just eat a lot of it raw in salads?

All over campus, the signage for waste bins was really interesting. Instead of just "recycling" and "trash" bins, Wash U had labeled all the trash bins as "landfill," to hopefully make students more conscious about where their trash actually ends up. They also had really attractive displays of what kinds of things could go into each container, to make recycling even more of a no-brainer: 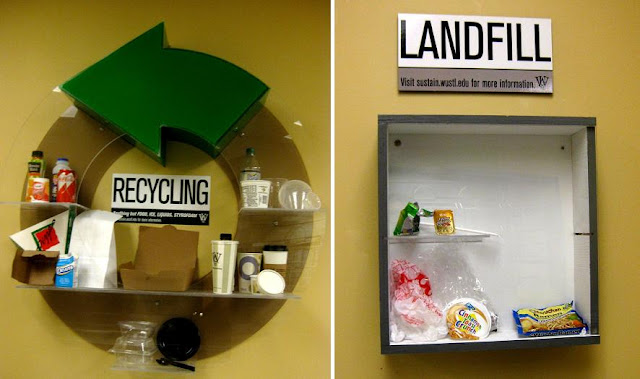 And finally, at least in one spot on the South 40, there was an innovative composting program, again with clear signage about what goes into the compost, and what happens to the food waste afterward. I read in the student paper that this is a pilot program that's new this fall, and that they hope to expand it outward to all the eateries on campus.

It was pretty cool to see all the progress that's been made at Wash U in the 5-6 years since my time there. Very exciting and inspiring!

What kinds of programs have you guys seen at other universities to promote this sort of consciousness among students? Is it working?!
Outreach