June 28, 2011
Barry Estabrook, whose blog Politics of the Plate was nominated for a James Beard Award this year, has just come out with a book called "Tomatoland: How Modern Industrial Agriculture Destroyed Our Most Alluring Fruit : 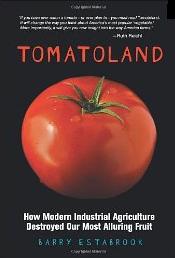 I just read one of his earlier articles on which this book is based, "Politics of the Plate: The Price of Tomatoes," and I want you all to go read it, right now.

Ok, now you're back? And you're shaken by the deft writing, stellar reporting, and gruesome facts?

A few excerpts: "Douglas Molloy, the chief assistant U.S. attorney based in Fort Myers, Florida...when asked if it is reasonable to assume that an American who has eaten a fresh tomato from a grocery store or food-service company during the winter has eaten fruit picked by the hand of a slave...said, 'It is not an assumption. It is a fact.'"

And as for what we, as consumers, can do differently?  Estabrook writes,

"Buying Slave-Free Fruits: In the warm months, the best solution is to follow that old mantra: buy seasonal, local, and small-scale. But what about in winter? So far, Whole Foods is the only grocery chain that has signed on to the Coalition of Immokalee Workers (CIW) Campaign for Fair Food, which means that it has promised not to deal with growers who tolerate serious worker abuses and, when buying tomatoes, to a pay a price that supports a living wage. When shopping elsewhere, you can take advantage of the fact that fruits and vegetables must be labeled with their country of origin. Most of the fresh tomatoes in supermarkets during winter months come from Florida, where labor conditions are dismal for field workers, or from Mexico, where they are worse, according to a CIW spokesman. One option during these months is to buy locally produced hydroponic greenhouse tomatoes, including cluster tomatoes still attached to the vine. Greenhouse tomatoes are also imported from Mexico, however, so check signage or consult the little stickers often seen on the fruits themselves to determine their source. You can also visit the CIW’s information-packed website (ciw-online.org) if you are interested in becoming part of the coalition’s efforts."

Of course, eating greenhouse tomatoes in the middle of winter (especially if you live somewhere like Wisconsin!) also takes its toll, at least environmentally-speaking.  I'd suggest in this case learning to eat more seasonally, and to forgo "fresh" tomatoes in the winter, instead relying on canned or frozen versions--which work just as well in soups and stews and pastas.

Even if you have to take your Potbelly sandwich without tomatoes, it seems worth it to help avoid slavery, eh?
Consumption Politics