June 23, 2011
So, I've alluded to the Springfield, IL farmer's market a few times this week, in earlier posts. What might have brought me to Springfield, Illinois, the Land of Lincoln, you might ask?

Well, it was none other than the 2011 Agricultural History Society meeting!

Not only did I get to pose with the whole Lincoln family (and my dear friend HC): 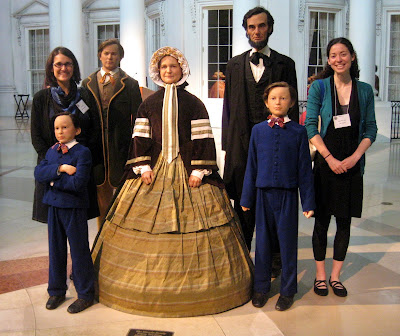 But I also got to see the kitchen of the actual Lincoln home, and to learn about how the family might have cooked in the 1850s: 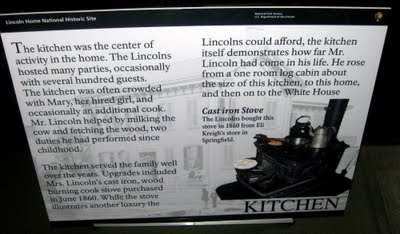 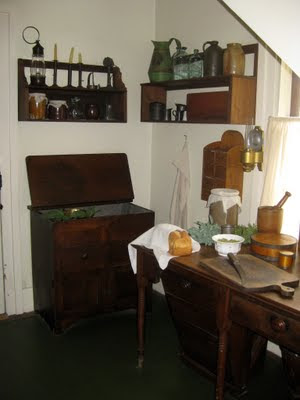 But in addition to seeing Lincoln (everywhere in that city!) I also partook in a really cool conference. The program describes it thus:

"Contemporary debates about food, agriculture, and rural life are often framed in opposition with little attention to historical context. Proponents of the local, slow, and organic often emphasize quality while advocates of the global, fast, and industrial stress quantity to satisfy world demand for food. The Agricultural History Society addresses this conundrum in a three-day conference with sessions that engage or transcend these debates by examining questions about quality and quantity as they relate to food, farming, and/or rural life from a historical perspective."

"Springfield, Illinois sits in the heart of the Midwestern Corn Belt, an area notable for its contrasts. It produces and processes corn that feeds and fuels much of the world, but critics decry the production system as non-sustainable. Agricultural manufacturing and processing industries helped define the post-World War II production revolution in agriculture, and have remained influential in technological changes that increase productivity and expand uses of cash crops. Archer-Daniels-Midland opened the first ethanol plant in the United States in 1978 nearby, in Decatur, Illinois. Those traveling to Springfield to tour historic sites associated with Abraham Lincoln drive through fertile flat land that sustained the most capital-intensive farms in the nation by the “Golden Age” of agriculture in the early twentieth century. Railroads such as the Illinois Central, for which Lincoln served as legal counsel, facilitated sale and drainage of swampy prairie; transport of grains to elevators and markets; and distribution of Sears, Roebuck & Co. and Montgomery & Ward products to rural consumers. The conference itinerary incorporates tours of Springfield attractions that further the conference theme and recognize the 150th anniversary of the start of the Civil War."

My own paper was entitled “The ABCs of Crops and Cans: Grading for Quality in the U.S. Canning Industry,” and was part of a panel on "A Taste of Quality: Reevaluating Transformations in Industrial Food Systems." I'm happy to share it, if anyone is itching to read about ways that early twentieth century canners attempted to standardize the consumer by introducing uniformity all along the production line.
Dissertation