Well, whatever it is, it most certainly applies to my ambitious garden plan as I described here. We finally broke ground and did some garden planting yesterday, and it ended up looking like this: 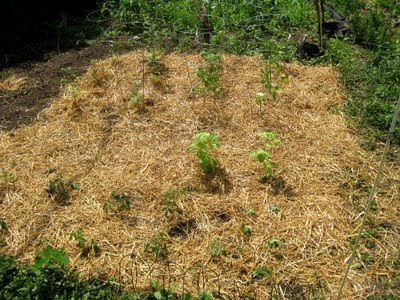 Mostly a big plot of tomatoes.  Which we love! But, it's a far cry from the 15 different vegetables I had previously envisioned.  Instead of looking like this:

All the tomatoes and sungolds on the right are the ones we'd been growing indoors, while the peas and beans and cabbages and cucumbers are the only seeds that actually sprouted of all the ones I tried to start indoors (I assume the other seeds were just too old to be viable).  Everything on the left side of the garden is just what was growing as weeds in the garden before we hoed it all up.  All those "Tomato transplants" were just growing as volunteer tomatoes in the garden, from seeds that had survived the winter, and so I transplanted them to one side of the garden, just to see what happens. The dill was also growing rampantly as a weed. The "unknown" seedling looks like this: 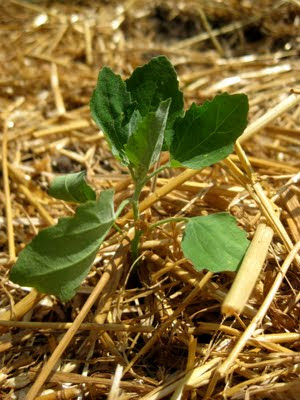 And although it may very well be a noxious weed, it looked sort of familiar to me, and so I decided to let it grow and see what happens.  Any gardening experts out there recognize it? Will it be something tasty, or have I made a terrible mistake?

Oh, and am I right this this is a milkweed, and that it's good to have it in the garden for some reason?  To attract butterflies or something? 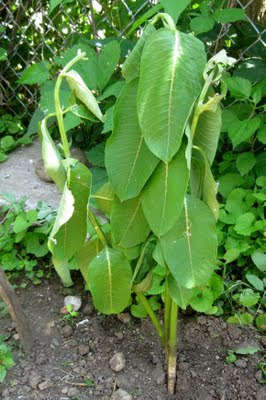 Is anyone sensing that I don't really know what I'm doing?  But at least it's all a mostly-fun big experiment, that might culminate in delicious food!
Gardening