May 10, 2011
The final Make-Your-Own Meal Night that I organized at the GreenHouse featured Quiche and a talk on backyard chickens by our egg-providers, MH and NO. (The previous MYO nights, which you can read more about, featured Burritos, Winter Vegetables, and Sushi.)

MH brought eggs from her chickens, Phoenix and Big Red, and the GreenHousers tried to identify whether they could tell a difference from the backyard chicken eggs and those I bought at the co-op (also organic, free-range, relatively local, and from small-ish chicken farms). Can you observe any differences? Any guesses as to which is which? 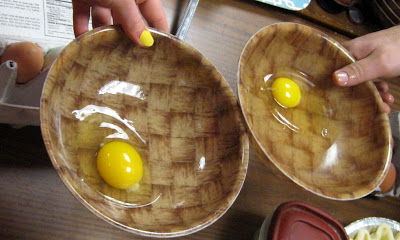 I brought all the crusts and fillings for the quiches pre-prepped and the students just mixed up the custard and assembled the quiches, according to Mollie Katzen's formula.

While the quiche-y goodness baked, MH and NO gave an entertaining and enlightening talk to a small group of GreenHouse students about the joys, the trials, and the ins and outs of raising backyard chickens.  They shared the sad story of two of their other original flock, they showed photos of their new baby chicks (so tiny!), and they made it all seem so easy and so fun. If you'd like to know more, two books that come highly recommended are City Chicks and Raising Chickens for Dummies. 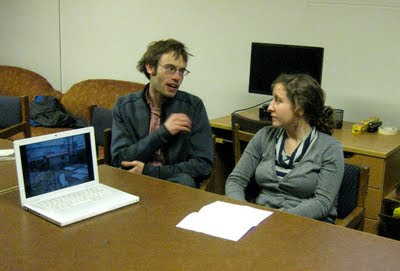 After admiring photos of baby chicks and talking shop, our quiches were finally finished! On the left are some mini vegetarian Quiche Lorraines that one of the GH students made, while on the left are three of the four quiches I prepared the fillings for. Clockwise from the top: a mushroom-broccoli quiche, a spinach-artichoke quiche, and an asparagus quiche. The last one, that was still finishing off in the oven, was a corn-bell pepper version.

We scarfed down these quiches, along with a green salad and chocolate chip cookies, over conversation and shared interests, ending the final MYO Meal Night on a beautiful, clear note.

But I'll be back next year as the GreenHouse Food Intern once more, so it's only goodbye for now!
Eggs Food Prep GreenHouse