May 17, 2011
In her book Animal, Vegetable, Miracle, Barbara Kingsolver offers a really useful image to help us think about seasonality and when different fruits and vegetables will be ripe and reading for the eating. She calls it the vegetannual. 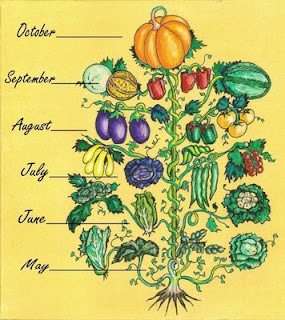 She suggests that the seasonal nature of vegetables follows the general development of one single plant itself: from leaves to green fruits to colorful fruits and back to roots again. I find it a really lovely and satisfying image.

In her own words:


"To recover an intuitive sense of what will be in season throughout the year, picture a season of foods unfolding as if from one single plant. Take a minute to study this creation--an imaginary plant that bears over the course of one growing season a cornucopia of all the different vegetable products we can harvest. We’ll call it a vegetannual. Picture its life passing before your eyes like a time-lapse film: first, in the cool early spring, shoots poke up out of the ground. Small leaves appear, then bigger leaves. As the plant grows up into the sunshine and the days grow longer, flower buds will appear, followed by small green fruits. Under midsummer’s warm sun, the fruits grow larger, riper, and more colorful. As days shorten into the autumn, these mature into hard-shelled fruits with appreciable seeds inside. Finally, as the days grow cool, the vegetannual may hoard the sugars its leaves have made, pulling them down into a storage unit of some kind: a tuber, bulb, or root.