May 04, 2011
Skills of organization are pretty key when it comes to big projects like wedding catering, and I exercised those skills to the max over the past few weeks. In addition to dividing my shopping lists into categories based on grocery store, I also broke each of the recipes down into discrete tasks and determined which day the task could be completed (Thursday, Friday, or Saturday--the day of the wedding).  Further, I labeled each of the steps with a letter that corresponded to a particular dish, whose full recipe was on the fridge, for cross-checking purposes. So, when friends came over to help cook, rather than having to ask me what to do, they could just look the list and say, "Ah, yes, now I will 'husk, rinse, and halve 200 tomatillos'." Click on the image below to see the full Google Doc version. 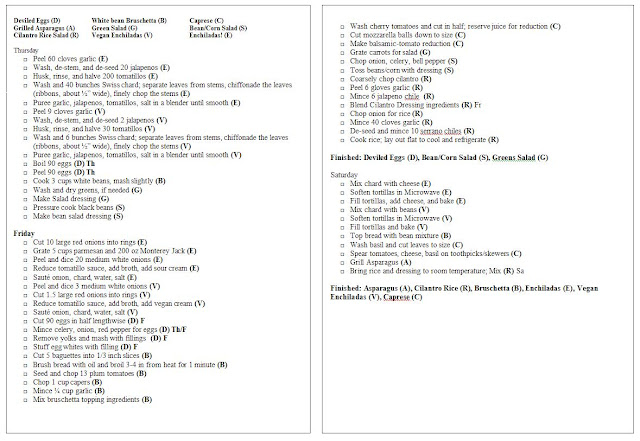 I taped these task lists, along with the schedule of who was cooking when, on a closet door in the kitchen, along with a pencil, for easy referencing and checking-off of tasks. Nothing quite so satisfying as crossing items off your to-do list, right? 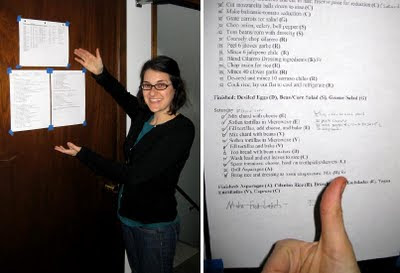 The other crucial piece of organization was getting enough people here during the whole cooking festivities, but not having too many people here at once--as our kitchen can really only hold 6-7 folks cooking at once. So, I sent out a Google Doc sign-up sheet with all the available blocks of time listed, along with spaces for people to provide their contact info and what kinds of items they were willing to lend. I initially scheduled everyone who had expressed interest, based on the information they'd given me about their availability and my own knowledge about their schedules (e.g. if they were worked 9-5 jobs, or if they were students with a more flexible schedule), and then let them change around as needed. 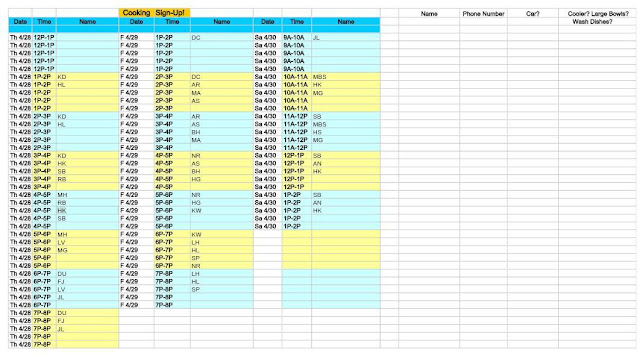 The sign-up sheet worked really effectively as a general guide, and then people were free to come a bit late, or stay a bit long, as they desired.  But the cooking was so much fun (more on that tomorrow), that who would want to leave?!

A final piece of the organization puzzle was making sure my friends and sous chefs would remain happy during their time here, and that they would feel as appreciated as they indeed were. So, I made them little gifts (inspired by these), and provided lots of snacks.

Doing this kind of work on the front-end of things really insured that the cooking extravaganza itself went by relatively smoothly and without spilled milk or tears.  And even with some smiles!