May 27, 2011
When Walnut Way Conservation Corps organizers asked members of the neighborhood what kind of fruit trees they wanted to plant in a community orchard, the neighbors said peaches. Peaches? In Wisconsin?  The organizers were somewhat skeptical about the growing potential of peaches in a  northern Wisconsin climate. But when the organizers checked with local  horticulturists, they found that peaches could indeed grow easily and prolifically in the inner city Milwaukee neighborhood. The peach trees  now produce pink blossoms in spring, ripe fruit in summer, standing as a testament to possibility--to horticultural and human growth alike. 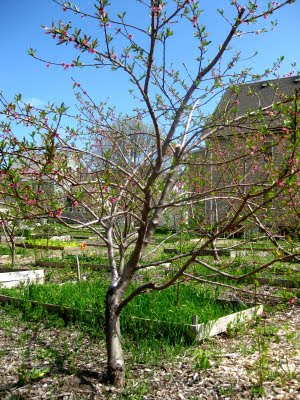 In addition to visiting the Sokaogan Chippewa community as part of this year's CHE place-based workshop, we spent an afternoon with some of the most inspiring, light-filled folks at Walnut Way. Sharon Adams founded the neighborhood organization in the early 1990s, after returning to the neighborhood where she'd grown up and instead of finding the vibrant lower-middle class black community she had left behind, she found a neighborhood rife with abandoned homes, drugs, crime, and fear.

The story of what happened next is best told on Walnut Way's own timeline, but here's a piece of it:

"Dismayed at conditions in the neighborhood of her happy childhood, [Sharon Adams] asked for help to save a condemned turn-of the century home across the street from demolition. She reached out and found willing partners … a carpenter dedicated as she was to restoration of people and houses and places, even when he was threatened or his tools repeatedly stolen … a community development worker, caught up in the vision of what could be … neighbors and more. Her leadership and persistence worked. The house was restored, and sold to a first-time homebuyer. She started taking daily exercise walks in the neighborhood, waving, calling out to residents peeking out from behind their window curtains, isolated by fear. Over time, others …men, women, children… joined the walks, and talked of what they could do to recapture their neighborhood the way it 'used to be.'"

"...The gun fire, drug trafficking and prostitution have virtually disappeared. Homes have been or are being restored. Sixty-five new homes have been constructed and occupied …construction is planned for 54 more new homes. High production gardens are cultivated annually, and a small tree nursery has been planted. People enjoy their neighborhood, meet and greet on the street …even at night! ... work and play together, and watch out for one another."

Urban agriculture has been a key piece of Walnut Way's programs (see the rain barrels, fruit orchards, and bee hives pictured above). Sharon and others see community gardens, nutrition education, storm-water retention, shade-tree nurseries, and other environmental elements as key components of this urban revitalization program.  And from the looks of it, it's been wildly successful.

This was the perhaps site that struck me most of all the places we visited during our workshop. As we were walking around the neighborhood, my friend AC said, "Anna, you know, you have to get back on the bus. You can't just stay here."  I guess it was pretty visible how much I was touched and inspired by the work that Walnut Way has done.

How to carry these kind of projects into my own life, to use my skills and connections to make change like this happen, in collaborative ways?  That's the big question.
CHE Environmental Justice