The Story of Mama's Cheese

July 20, 2011
Growing up, there was always a dish (a rectangular, yellow metal dish to be precise) of freshly-made cheese in the fridge that my mom had whipped up in recent days. Though I often saw her pour the milk into the big pot, set the pot into the warm oven or on top of the water heater, and drain the thickened milk through a cheese cloth, I never really knew what she was doing.

So, when, after she read my post about my own experience with cheese-making, my Mama offered to write a guest post about her cheese, I jumped at the chance to have her share this story with you all. I hope you enjoy reading this as much as I enjoyed hearing it!
---


I grew up in the Ukraine. When I was little, though I lived on the outskirts of a big city, there was a market every weekend. Peasants would come from all around and would bring their fares to the market. A lot of them brought cheese, and every woman or man--though it was usually women who tended the stands--would stand in the same row, and let you try little pieces of cheese that they made. I still remember even the taste of that cheese. Some cheeses were a little bit softer, some were a little harder, but it was all a sort of the cheese that here you might call farmer’s cheese, or Amish cheese—soft, white, and ranging from crumbly to smooth. We could buy cheese in the stores, but it wasn’t the same at all, it was like day and night. So, we made blintzes with this cheese as a filing, we made vareniki, or we just ate cheese separately, like a sandwich with cheese.

So, when I moved to Arkansas in the early 1980s, I wanted to make blintzes. I had this memory, almost the feel in my mouth, of that cheese. I went to the store and I couldn’t find anything like that. I looked at cottage cheese, ricotta cheese, cream cheese, but none of them even came close to what I remember from childhood and my life as a young woman in Ukraine. It wasn’t the same.

But a taste in my mouth was saying “let’s recreate it.”

I didn’t get a chance to try, though, until I got a little inspiration in Finland in the summer of 1988. That summer, we spent three months at Mekrijarvi, a research station in eastern Finland. It was a small place, almost a village. People had their own cows, and made their own bread and cheese. I tried the cheese there, and thought, “Finally, this cheese was exactly the same that I had in Ukraine!” So over there I made my first cheese all by myself, after seeing someone else doing it at their house.

When I came back to Arkansas, I called Tyotya Ania (my husband’s aunt, who was famous in the family for being a great cook), and asked if there was a better way to make cheese than my experimental version. And she said you can add some yogurt, or buttermilk, to get it going.

I tried it with store-bought milk—first with Vitamin D milk, but my husband, Anna’s Papa, thought it was too fatty. So, we tried it with 2% milk, which was fine, but ended up more thin and watery.

We also ended up seeking out some real milk, by finding a couple in our county who had a milking cow. We’re still friends with that couple to this day. And although I now make cheese with store-bought milk, it’s definitely better if you can find real, farm-fresh milk.

So, here’s the recipe. Hope you can make even better cheese than I did! 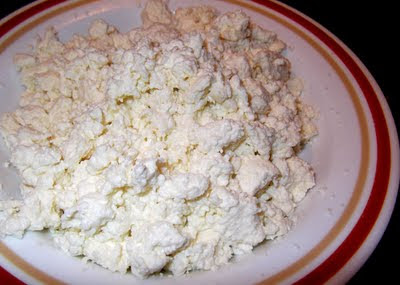 Image from www.deliciousobsessions.com
Liza’s cheese
1 gallon of milk (whole, farm-fresh is best, but other varieties will do)
1 pint (sometimes I use more) of buttermilk (or plain yogurt or kefir), no fat-free substitution
Family Food Prep Recipes Tradition