In other words: I love Indian buffets.

And so when Maharani opened on West Washington, just two blocks from where we lived our first year in Madison, it instantly became a treat that we savored whenever we could (though we quickly realized that eating a big Indian lunch almost always equaled the need for an afternoon nap--so it's not the best promoter of afternoon work productivity!) 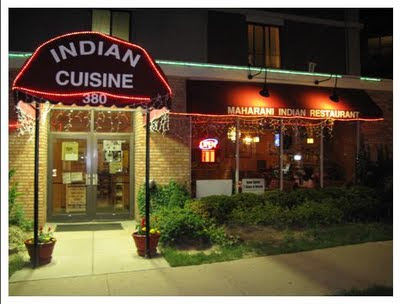 image from www.maharanimadison.com
Although the dinners we've had there have also been impressive, Maharani is remarkable for its consistently delicious lunch buffet. It features a whole bank of salads and chutneys and sauces--you've got the tamarind and the mint and the tomato and the onion, and so much more! (even though Justin thinks the salad just takes up important real estate on the buffet plate, I contend that the raw vegetables serve as excellent cool and crunchy counterpoints to the warm and saucy entrees). Then there are the appetizers, featuring the best of North and South Indian cuisine: samosas, hot naan brought right to your table, dosas, idli, vegetable pakora of various sorts.
And then the entrees. Palak Paneer to die for! Creamy kormas that take your breath away! Aloo Gobi chock full of vegetables! Tikka Masala turned vegetarian! And all served with delicious basmati rice, plain and biryani style. The vegetarian dishes are clearly delineated, and there are lots of them, that come in and out on a rotating basis. 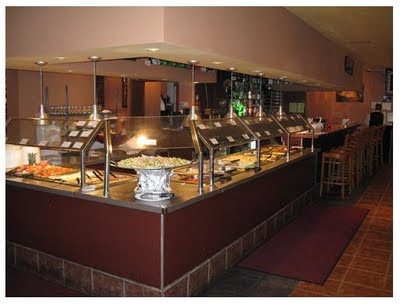 image from www.maharanimadison.com
But as is so often the case, it's not simply the food that draws me back to Maharani again and again, but also the people. One person in particular: a waiter at Maharani with whom I formed a special bond two years ago, during my wedding weekend. That night, when our families were in town but most of the other guests had yet to arrive, we decided to dine at Maharani. I showed up a little before the others, for some reason, and seated myself at the bar to wait.  I ended up telling the waiter behind the bar that I was going to be getting married that weekend, and he began to share his story with me.  He told me that he no longer had a chance at love, because his one true love, who he had left back in India, had just called him days before to say she couldn't wait for him any longer, and that she had become engaged to another man. Because he believed there was only one person out there for each of us, he thought himself doomed to a future without love.

I tried to dissuade him of this view gently, while still honoring the emotion he was understandably feeling over the whole thing. Soon, Justin and our families arrived, and I introduced them to him, but had to end our conversation. Throughout the meal, he served us very attentively, and then at the conclusion of the meal, brought out an Indian carrot dessert with a candle in it, to honor our upcoming marriage.

We blew the candle out together: 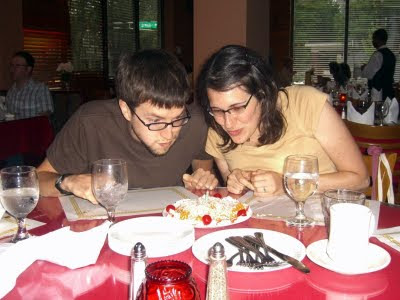 We left my new waiter friend a note on the table, thanking him for his honesty and kindness. Since then, every time we've returned, he has hugged and greeted us, brought us free drinks and been so warm.  I've tried to think of ways to check in with him about his lost romance, or to establish an actual friendship, but something about the barriers of language and immigrant culture and restaurant culture has kept that from happening.

Still, every time we go to Maharani, our central desires--for human connection and for great food--are doubly fulfilled.