My department decided to counter-protest last Saturday's Tea Party counter protest by having a "tea party" of our own, complete with banana bread, scones, snickerdoodles and hot tea! Despite the "In Wisconsin, we drink BEER, not TEA!" signs, we decided that we liked tea and didn't want to have it co-opted by the pro-Walker side . So baked goods and warmth all around! 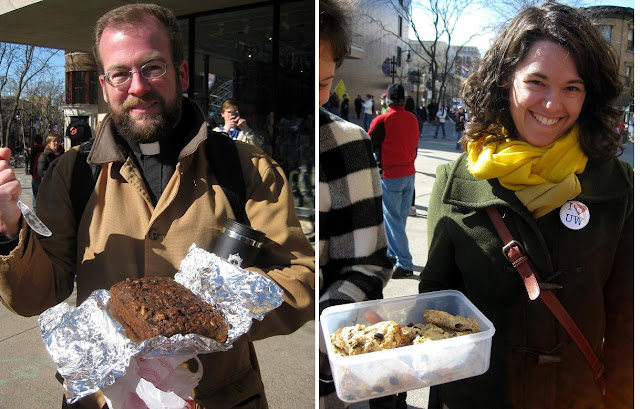 The whole Tea Party counter-protest was a bit of a joke anyway. Although the organization had tried to bus people in from all over the state, as far as those of us who were there could tell, there were maybe 2000 or so Tea Partiers among the crowd of 60,000+ who gathered at the capitol on Saturday.  At least, this is what the crowd situation seemed like, given the ration of pro-union vs pro-Walker signs, and the size of the group gathered on the Tea Party rally side of the capitol. And even that latter rally side seemed to have dispersed by 2 PM, while the pro-union forces stayed around the capitol in large numbers into the evening hours (we even made it back for some Settlers of Catan, some dancing, and some ukulele-playing after midnight). 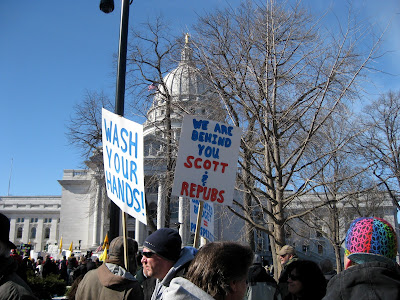 But whatever the size of the counter-protest was, there were signs reading "This is a Peaceful Protest" and other such calming words throughout the capitol, which helped to make the whole thing feel like a community effort to keep the focus on killing this bill, rather than killing our opponents. 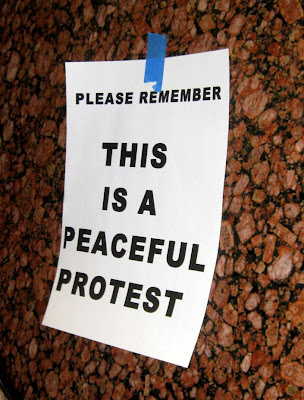 Peaceful democracy in action is a beautiful thing.
Politics