February 21, 2011
Life around here has been so consumed by the "budget repair" bill protest rallies for the last week that it's hard to think of much else.  Brief escapes from the capitol to get some work done always just lead to obsessive checking of the WisPolitcs Budget Blog, Defend Wisconsin, and the Facebook page of the TAA (Teaching Assistants' Association). But boy has it been exhilarating. So many new developments, new enthusiasms, renewed senses of hope!

Among those leading the charges of hope and enthusiasm is my friend KG. He is not only the same KG who cooked the amazing dinner of my Co-op Inspiration post, but is also the co-President of the TAA, the union of graduate student workers at the University of Wisconsin.  A little over a week ago, KG was just a graduate student with a little collective bargaining experience and a knack for leadership. Now, he's being quoted in the New York Times, communicating with national labor leaders and the UW Chancellor, being interviewed live on BBC, and generally leading this amazing, ground-swelling campaign with his usual charisma, level-headedness, and thoughtfulness. I am in awe.

So, to bring it all back to food (because that's what this blog is supposed to be about, right?),* let me share that one of the ways in which we were able to help with the effort was to bring KG (and his co-President) a hot meal when the days of subsisting on peanut butter, granola bars, and donated cheese plates got to be too much.

The Indian place across the street (with a sign in its window that read "We support Wisconsin public employees") served us up three to-go boxes of savory curries that we were able to take to the hardworking TAA leaders in the capitol: 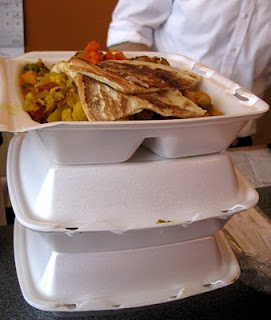 Sometimes, it has felt hard to know what to offer to help this big, shifting organism of protest, but the least we could do was bring some delicious food from a local restaurant to nourish those leading the charge. (And it was even worth the waste of the styrofoam containers, which you know I was grimacing about...)
Food to the rescue!
*In the interest of full disclosure, the only reason I was able to write about anything strictly-food-related (and not protest related) topics on Thursday and Friday was because I had pre-written those posts before all of this got started...
Local Business Politics Reading Links