November 25, 2013
In his book Eating Animals, Jonathan Safran Foer offers this thought: "If this entire book could be decanted into a single question—not something easy, loaded, or asked in bad faith, but a question that fully captured the problem of eating and not eating animals—it might be this: Should we serve turkey at Thanksgiving?"

Should we serve turkey at Thanksgiving?

This is his whole book in a sentence. The chapter goes on to explore the dark side of turkey production in the U.S.  (Read short versions of similar stories here, here, or here). 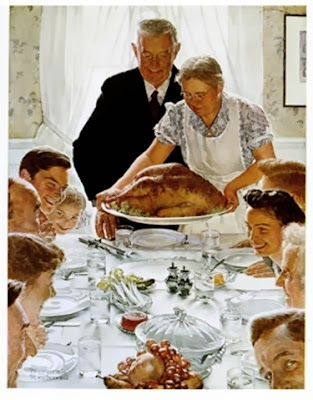 But in classic Foer fashion, he leads up to this "single question" with a personal take on the meaning of Thanksgiving and of storytelling. The way he recounts his own Thanksgiving memories, and their embeddedness in some bigger ideas about a good meal, is beautiful:


. . . Two dozen or so mismatched chairs circumscribed four tables of slightly different heights and widths, pushed together and covered in matching cloths. No one was fooled into thinking this setup was perfect, but it was. My aunt placed a small pile of popcorn kernels on each plate, which, in the course of the meal, we were supposed to transfer to the table as symbols of things we were thankful for. Dishes came out continuously; some went clockwise, some counter, some zigzagged down the length of the table: sweet potato casserole, homemade rolls, green beans with almonds, cranberry concoctions, yams, buttery mashed potatoes, my grandmother's wildly incongruous kugel, trays of gherkins and olives and marinated mushrooms, and a cartoonishly large turkey that had been put in the oven when last year's was taken out. We talked and talked: about the Orioles and Redskins, changes in the neighborhood, our accomplishments, and the anguish of others (our own anguish was off-limits), and all the while, my grandmother would go from grandchild to grandchild, making sure no one was starving.

Thanksgiving is the holiday that encompasses all others. All of them, from Martin Luther King Day to Arbor Day to Christmas to Valentine's Day, are in one way or another about being thankful. But Thanksgiving is freed from any particular thing we are thankful for. We aren't celebrating the Pilgrims, but what the Pilgrims celebrated. (The Pilgrims weren't even a feature of the holiday until the late nineteenth century.) Thanksgiving is an American holiday, but there's nothing specifically American about it—we aren't celebrating America, but American ideals. Its openness makes it available to anyone who feels like expressing thanks, and points beyond the crimes that made America possible, and the commercialization, kitsch, and jingoism that have been heaved onto the shoulders of the holiday.

Thanksgiving is the meal we aspire for other meals to resemble. Of course most of can't (and wouldn't want to) cook all day every day, and of course such food would be fatal if consumed with regularity, and how many of us really want to be surrounded by our extended families every single night? (It can be challenge enough to have to eat with myself.) But it's nice to imagine all meals being so deliberate. Of the thousand-or-so meals we eat every year, Thanksgiving dinner is the one that we try most earnestly to get right. It holds the hope of being a good meal, whose ingredients, efforts, setting, and consume are expressions of the best in us. More than any other meal, it is about good eating and good thinking.

And more than any other food, the Thanksgiving turkey embodies the paradoxes of eating animals: what we do to living turkeys is just about as bad as anything humans have ever done to any animal in the history of the world. Yet what we do with their dead bodies can feel so powerfully good and right. The Thanksgiving turkey is the flesh of competing instincts—of remembering and forgetting.

. . . This will be the first year we celebrate in my home, the first time I will prepare the food, and the first Thanksgiving meal at which my son will be old enough to eat the food the rest of us eat. If this entire book could be decanted into a single question—not something easy, loaded, or asked in bad faith, but a question that fully captured the problem of eating and not eating animals—it might be this: Should we serve turkey at Thanksgiving? [p. 244-245]


For those of you who haven't read Eating Animals, I'd highly recommend it. And I hope this passage from Foer and a consideration of factory farm production of turkeys gives us all something to mull over as we plan our menus in the week to come.

To find local, ethically-raised turkeys in your area, check out Eat Wild.

Or, go turkey-less for the holiday! I'll be sharing my own vegetarian Thanksgiving/Hanukkah menu later in the week.

Some other Thanksgiving food related links worth checking out: