Bill and Lou: Oxen for Lunch

October 24, 2012
A few days ago, NPR's food blog The Salt shared a fascinating story, "Despite Protest, College Plans To Slaughter, Serve Farm's Beloved Oxen." It told the tale of two oxen, Bill and Lou, who have worked at Green Mountain College, on the campus's Cerridwen Farm, for the last ten years. But now, because Lou has an injured leg, the two oxen are to be retired (Bill will retire too, because oxen work as a team). 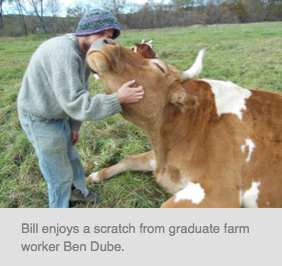 Although a nearby animal sanctuary, Vine, has offered to take the oxen and let them live for free in the sanctuary space, Green Mountain College has declined the offer and plans to slaughter the oxen and serve their meat in the form of hamburgers in the college cafeteria.

Because so many of Green Mountain's students love Bill and Lou, and consider them to be campus mascots, there has been a significant outcry from those who believe it cruel and unnecessary for the college to kill these gentle animals.

But the Cerridwen Farm workers who advocate the slaughter think that it's important to see the animals as part of a sustainable farm venture, and not just as pets. They do not want to deny the cycle of life and death, and believe eating these animals will preclude having to support consumption of meat that most likely would come from factory farms. (See the bottom of my post for the full response from the Farm staff).

I think this is a particularly interesting case study that highlights the complexity of meat-eating in our modern world (to read previous posts on this topic, see: On the Complexity of Meat Substitutes and A Simple Argument for (Quasi-)Vegetarianism).

Reading the comments on the original Salt post is especially fascinating, because it pits vegans and animal rights activists against environmentalists and the major representatives of today's "real food movement". In some ways, it seems like all of these groups would have some fundamental goals in common. But when it comes to actual conversations about animals' lives, little agreement can be found.

What do you all think? Should Bill and Lou be served as hamburger meat? On the broader issue, how do we balance animal ethics with environmental ethics?

10/12/12: College Statement regarding Bill and Lou

"At Cerridwen Farm, Green Mountain College’s working farm operation, we seek to teach and model small-scale farm production that is ecologically, economically and socially sustainable. We work to maintain high ethical standards for treatment of the land, people and animals. We have draft animals on the farm because they do important work which would otherwise be performed by equipment that consumes diesel fuel. We are currently engaged in many promising projects to demonstrate how small family farms, managed sustainably, can survive and thrive in an agricultural landscape dominated by industrial farms.

Bill and Lou came to us nearly ten years ago as malnourished and neglected animals. At GMC they received considerate and humane care.

This was a decision many months in the making, with members of our community carefully weighing alternatives. On complex ethical matters, thoughtful and well-informed people may reasonably disagree. Here is a bit of background on the complexities and the decision-making process:
Those who know Lou and Bill best—our farm staff and students—are uncomfortable with the potential ramifications of sending the animals to a sanctuary. Bill and Lou are large animals, weighing over a ton. A transition to a new setting will be difficult for them, and only postpones the fact that someone else, in the not-too-distant future, will need to decide that it is kinder to kill them than to have them continue in increasing discomfort. If sent to a sanctuary, Bill and Lou would continue to consume resources at a significant rate. As a sustainable farm, we can’t just consider the responsible stewardship of the resources within our boundaries, but of all the earth's resources"