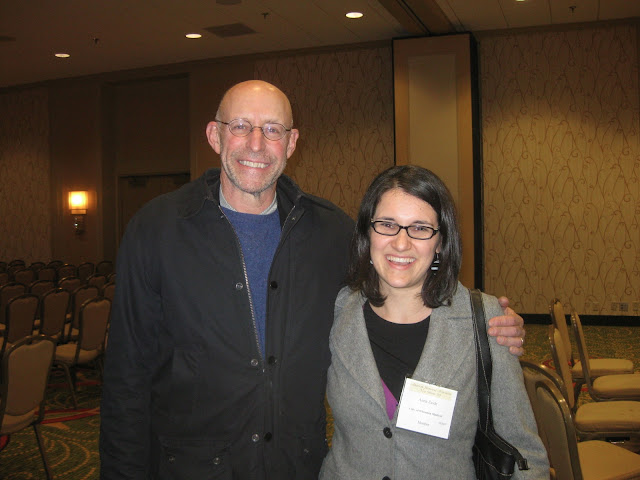 My brush with fame came last week at the American Historical Association (AHA) annual meeting in New Orleans. There, I got to briefly meet, and take a photo with, Michael Pollan!

This famed writer, scholar, and food movement leader has been one of my most important influences over the last seven years, shaping my interests, intellectually and personally.

He was at this professional conference (of a profession not at all his own), on the invitation of my graduate school mentor and AHA President, Bill Cronon. One of themes of this year's AHA, and of Bill's presidency, was "The Public Practice of History in and for the Digital Age." And because Michael Pollan is one of those people who manages to use history in fascinating and useful ways, without himself being a trained historian, his take on "public history" is a deeply valuable one.

Pollan spoke at two different sessions at the conference, both moderated by Bill Cronon, both of deep interest to me:


UPDATE: A video of the full "Food, Farms, and History" panel is now available online. It's worth a watch.

(From left to right: Bill Cronon, Michael Pollan, Donna Gabaccia, Deborah Fitzgerald, and Brian Donahue)
After the second session, I mentioned to several friends how much I wanted to meet and talk with Pollan. They urged me to approach him and introduce myself, or to ask for an introduction through Cronon. I resisted at first.

Part of me chalked up this resistance to simple nervousness or to being starstruck. But another, deeper, part of me realized that meeting Pollan in this way, for a just a minute after a public lecture, would leave him seeing me as no different than any of the scores of others folks who clamor for his attention. I didn't want to just be a fangirl. I want to be his colleague, and perhaps even his friend. I feel such an intellectual kinship with him that I wanted more than just a passing hello.

Still, given that a passing hello and a chance to be a fangirl are better than nothing, I went for it.

A friend, AW, asked Bill to introduce me to Pollan, and although everyone was in a hurry to head out after the session, Bill kindly did the introduction, saying, "This is one of my graduate students, whose work you would find very interesting." I shook the man's hand, beamed at him, thanked him for being at the AHA, and gave a line about my work on the history of the canning industry. Pollan graciously told me how interesting and important that work was, and that I should be in touch with the University of California Press to publish it. Just as he turned to leave the room, I managed to ask for a photo. He agreed. His college-aged son, Isaac, who was there at the conference with him, played photographer, immortalizing the moment.

And there we have it. My encounter with Michael Pollan, deeply gratifying, yet insubstantial, all at once.

Later that same day, I also got to hear Bill Cronon deliver his Presidential Address, "Storytelling," a lecture filled with Bill's characteristic insight, nuance, and wisdom--plus some great stories. You can watch the full version, on Youtube, here.

This was a day packed with tremendous intellectual stimulation from two of my favorite environmental thinkers.