August 29, 2013
After some recent bloodwork, my doctor told me that I was a little low on iron (broken down into component parts, I was a little low on red blood cells, hemoglobin, and hematocrit). In order to prevent further anemia, she encouraged me to increase my iron consumption, and perhaps to take an iron supplement. Because I'm a vegetarian, it's a bit harder to get high levels of iron, so I've been researching good whole food sources (and am happy to write more about that in a separate post if folks are interested!).

Among the recommendations I found, many sources pointed to eating Cream of Wheat for breakfast, perhaps with blackstrap molasses and dried apricots (both high sources of iron in their own right) mixed in. 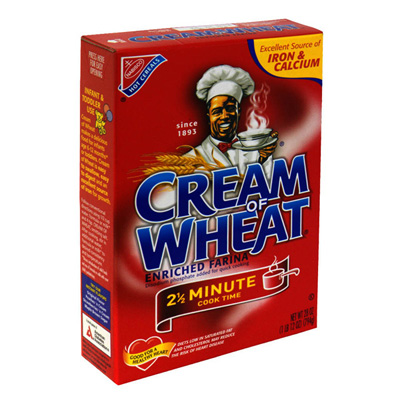 I grew up eating what we called, in Russian, mannaya kasha, which is traditionally a semolina flour porridge. But we ate what was available in small town Arkansas: Malt-o-Meal, or its equivalent Cream of Wheat. This was a favorite soothing dish, especially when I was sick, and my Mama would always let me drop in the raisins in a smiley-face pattern before mixing them all in.

So, the idea of eating Cream of Wheat to bulk up my iron levels seemed totally fine, familiar even. When I found it in the store, however, I was a little taken aback. My eyes instantly zoomed in to the little yellow panel at the top right of the box: 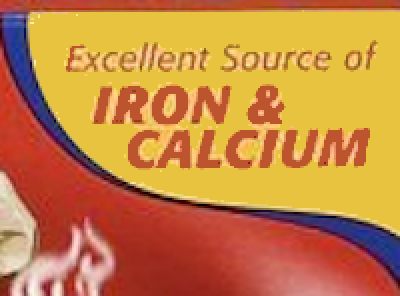 The only problem is, in all my research about high-iron foods, I discovered that calcium actually inhibits the absorption of iron. And because iron from non-animal sources is of the non-heme variety and already harder to absorb, pairing iron and calcium is a big no-no. In fact, most recommendations suggest separating high-iron food intake from high-calcium food intake by a few hours. WebMD, for example, recommends: "To absorb the most iron from the foods you eat, avoid drinking coffee or tea or consuming calcium-rich foods or drinks with meals containing iron-rich foods."

So, what is Cream of Wheat doing putting both lots of iron AND lots of calcium in the same food? Doesn't that kind of defeat the purpose of the iron fortification?

It occurred to me that this is an example where nutritional fortification might have far more to do with advertising purposes than with actual nutritional improvement. Most consumers don't have a lot of information about how nutrition really works (and perhaps most scientists don't either!), so wouldn't know that mixing iron and calcium is a bad idea. They might just know that both iron and calcium are good to have in their diets. So that little yellow icon (and the corresponding nutrition facts on the side or back of the box) would just shout a generic, "This is healthy! Eat it and feed it to your kids!" The nuance is unimportant. The way these nutrients actually interact in your body is unimportant. The important part is that nutritional fortification sells.

Or is there a more benign explanation? What do you think?!

As a bonus, some cool historical photos of Cream of Wheat ads from the early twentieth century here. Like this: 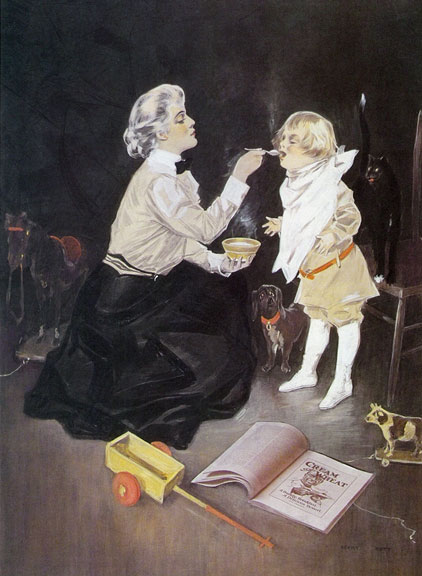